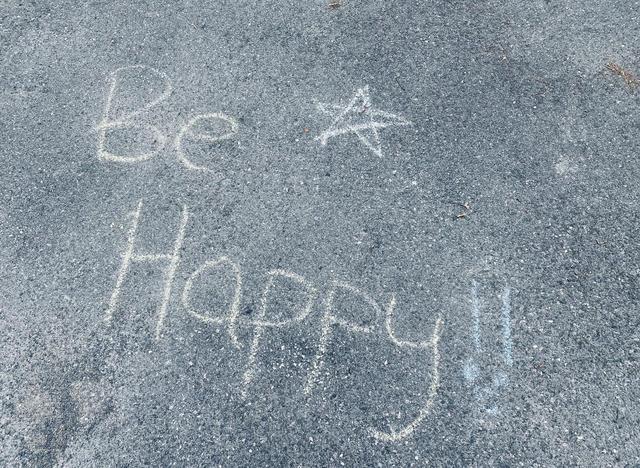 Photo: "Driveway Graffiti," one of many driveway admonitions in New Paltz written in adult hands, probably mostly for the children., or for all of us.  Others read: "Be Brave, " "Be Safe." ©copyright by Carol Bergman 2020

How Do You Feel?

The voice of the intellect is a soft one, but it does not rest until it has gained a hearing.

The Governor, aka Governor Cuomo, is talking about how he really feels, not just how he feels but how he really feels. In his sonorous voice with the still thick Queens accent, he's explaining that such honest conversation is essential for our mental health during the pandemic, and he's decided to demonstrate. It's a valiant effort: he's worried, anxious, thinking about the families who've lost loved ones, and his own mother. He's modelling emotional honesty to his flock, the citizens of New York State, the nation, and even as far away as India, a NYU colleague has told me. Just hours later, traveling home from his 75th consecutive press conference, a photo pops up on his Facebook feed: he's fast asleep, his daughter on his shoulder. This is how he really feels: tired, protective of his daughter, loving. He's refueling for the next challenge, he's getting back to work as he sleeps. New York Disciplined. New York Tough.

As early as March 25th, Cuomo set up a Mental Health Initiative. He asked psychiatrists, psychologists, and licensed clinical social workers to volunteer. Within hours, thousands had done so. An electronic help center was set up, more and more professionals volunteered, topping 6,000. A free hotline was announced: 1-844-863-9314

I decided to try it. In fact, I've used it twice. At first, I told myself that I wa calling out of journalistic curiosity. Does the hotline work? How does it work? And I was curious: can the Governor deliver yet again? But that evasive veil didn't last long. Which is to say, I was curious, but I was also making the call because I needed an empathetic ear and some concrete advice.

I had just taken a long solo walk on my favorite street in New Paltz. Mask off, mask on as soon as I saw people walking towards me. I hated it. I'd been anxious, even agoraphobic, as I left the apartment. New tenants, unmasked, and an inconsiderate handyman who also works in a prison, a petri dish for the virus.

Writers, even nonfiction writers, have vivid imaginations. Our minds click ahead into what might happen, what could happen, what in the non-writer world would be called"catastrophizing," amidst a catastrophe, if that isn't an oxymoron, or I don't know what. All those unmasked neighbors and workers scared me. If we are now into an era of defiance, what is in store for us?

I walked fast and then ambled disconsolately back to the car. I put my walking sticks away, opened the back windows, and took a deep breath. The sweet smell of freshly mown grass filled the car. I was relieved but also miserable. The mask had made me feel—really feel—claustrophobic, isolated, and desperate to take flight like the soaring catbirds I'd identified as I walked past an efflorescing meadow. If only I could morph into a catbird, I thought.

A young woman answered the phone in five seconds. Five seconds, dear reader! How could a young woman help me? I said to myself, not trusting that the helpline had vetted the volunteers' credentials.

She waited for me to speak, said a few kind words, how hard a time it is for all of us, told me her first name--Jenny. "I'm working virtually at home also," she said. I felt easier as my anxiety came out in a rush. She asked all the right questions and gave me the concrete advice I needed that particular day in that particular moment. The call lasted all of five minutes. Short and focused as it was, I felt fortified to press on with my day. Jenny's voice—just her voice, not text, or email, or video chat—was enough to comfort me.

A few weeks later, I used the hotline again with a different young professional and had a similar positive experience. And I'll use it again if I am feeling out of balance, frightened, lonely inside my mask, or bewildered beyond what feels like normal, writerly bewilderment.

I haven't seen any stats on how many people are taking advantage of this unprecedented free service, but I am sure the numbers of call-ins are in the hundreds of thousands, at least I hope they are. There are many sub-cultures in America where asking for emotional help is considered weak, or shameful. But even these feelings are real and must be acknowledged and overcome, as needed. All of us have to stay physically and emotionally strong during this already long siege. There are more challenges ahead. It's not over.