Misplacing my iphone is not the best way to start the day. The ringer was silenced, that I knew, so no way to call and track it, and I had no memory of turning off the phone entirely after a last check of email, the weather, a last round of electronic Scrabble, or putting it back into my purse. Encased in purple plastic, it is camouflaged in a variety of locations in my apartment. I have misplaced it before—who hasn’t—and called it, heard it vibrate, and still couldn’t find it. Finally, I understood why so many people have zinger covers—zebra patterns, neon. I’ll have to think about this.

The phone was gone, for more than an hour. The sense of loss was complete. In fact, I was so distraught I could not write in my journal, or read, or plan the rest of my day, or eat breakfast, or get to work. It occurred to me that I have become co-dependent with my very smart phone which, as we all know, is a mini-computer. Is this a good or a bad thing? Both, I’d say, not the co-dependent part—not that—but the practicality of the phone, the use we make of it as a tool. It really is a splendid invention.

Here are the free apps particularly valuable for writers:

1. Dictionaries, including a translation dictionary from any language you can imagine into and out of English. I gave away all my hard cover dictionaries. If the system ever crashes—in an emergency say—I’ll have to head to the library.

2. The Kindle app. Best use, a movie theater during the endless commercials before the show begins.

4. Safari and Chrome. Writers can find out anything, anywhere, at any time.

And these are just four. Please feel free to add your suggestions in the comments. And if you still have a flip phone, I commiserate.  Read More
Be the first to comment 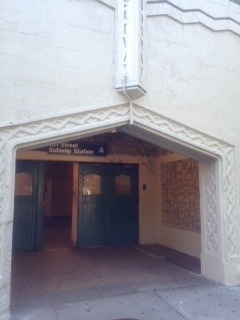 The 183rd Street entrance to the A train.
Walking into the station every day was making me ill. The paint was peeling off the deco facade and the waiting area by the elevators smelled like a pissoir. No one else seemed to mind, on the way from here to there, rushing, eager to get onto the air conditioned train, what did it matter? But I minded—a lot. I wasn’t in Paris and the odor wasn’t charming because of the Parisian pissoir flavor. And, in Paris, the deco Metro signs and facades are protected works of art.

Something is very wrong in a city—a country—where whatever historic landmarks we have are left to decay. At the very least, why doesn’t the community get together to find a makeshift solution, I thought. Budget restraints? Please.

Maybe it was because I was new to the neighborhood and the move had been a hard one. A filthy, neglected station entry: not to be tolerated. So I asked around: Anyone doing anything about this? It’s a friendly neighborhood and easy to talk to people on the corners, in the stores, in the park. A renovation was scheduled for the platforms sometime around 2016, I learned. As for the entrance, nobody knew anything. Smell bother you? Hadn’t noticed.

So I went online to find out who was in charge and wrote a letter cc’ing it to this person and that, as well as the Mayor and the Straphangers Campaign. The Mayor is a wealthy fellow who collects art-the city is a work of art, or can be, no?-and he rides the subway.

Such letters—of complaint and concern—are not easy for me to write. I get twisted up trying to remain polite, respectful, and positive. Years ago I studied mediation and conflict resolution and have never written an insulting word to a civil servant since. So I began with thank yous for keeping the trains running well, for all the repairs, for working underground when the sun is shining, and for speaking clearly into the microphones. A pleasant by-product of post 9/11 surveillance has been improved audio systems on the trains and in the stations. I thanked the MTA and the Mayor for that. And then I got down to business: Anything you can do about the peeling paint and smell of urine at my station? I know it’s just one station, and I am just one traveler, and so on.

Dear Reader, I received a phone call from the station manager two days later. And we had a very personable chat. And a week after that, the peeling paint and smell of urine were gone.

A local friend said: “That must have been some letter.” I didn’t think so. No, it was a polite, quite ordinary letter. I just had taken the time to write it. Read More
Be the first to comment

I went into a Barnes & Noble yesterday for the first time in a while searching for a new copy of “The Great Gatsby,” which I re-read every summer. My copy—an old Penguin—has disintegrated into brittle brown dust. Of course, I have Gatsby on my Kindle, but as I have explained already several times in this blog, I started to miss the sensory experience of holding a paper book and flipping its pages. And, of course, while I was in the store, I looked around. The smell of the books was delicious; it’s a candy store. And, I noticed, that many novels are now a different, longer shape. I liked the look and feel of that. But I left without buying anything. I’m going to be traveling in a week and the Kindle will have to do.

As for my report on the re-reading project I began after my recent move, it is coming along well. It’s instructive to return to books long stored on the shelf that seemed brilliant at the time, keepers, never to be abandoned. Some are and some aren’t. The Maxwells have stood the test well though I’ll only keep “They Came Like Swallows.” Every sentence in that book is a gem. But Paul Bowles’ “Up Above the World” is dated and the sentences are overwritten. I wonder, of course, how my work will be judged in one hundred years, if it is at all. But I know it’s best not to think about posterity when one is writing. I learn as I go and try to get better with every effort. It’s the effort that is important, and the practice. Some writing hits the zone, some doesn’t.

I think it was Stanley Kunitz who said that as he evolved as a writer, he chose simplicity and rigor over excess in the language he used in his poetry. I find myself doing the same. I remember the first writer’s group I belonged to: three poets and three prose writers. My goal was to impress everyone with my vocabulary and erudition. I didn’t succeed and I didn’t publish anything until I stopped trying to impress everyone with my vocabulary and erudition. My vocabulary has grown since then, I hope, but I am not trying to use it to wow anyone. Words are tools for precision and insight, or for precision of insight. And that’s my criteria for the books I am re-reading: What do they have to say? Are they saying it well?  Read More
Be the first to comment