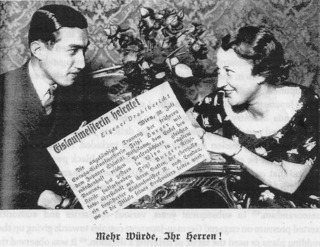 I have had an email correspondence with Professor Krebs over the years and now his essay has appeared in a book called “Race and Racism in Modern East Asia.” He sent me a print-out which was—in its way—thrilling as I had never seen the wedding announcement photo of Fritzi and Nishikawa. And though I don’t agree entirely with his hypothesis about Fritzi Burger during the war years, I was very pleased that her story—and, by extension, the story of my family—continues to resonate with historians and has become part of the historical record. For this reason, and many others, it is important that journalists and historians remain responsive to one another’s queries. This personal contact and exchange of information and ideas far exceeds what we can discover on the internet. Not everything is scanned—this photo was never scanned, for example—and the interpretation by historians of what we find is also essential, as well as its dissemination.
Read More
Be the first to comment

People You May Know 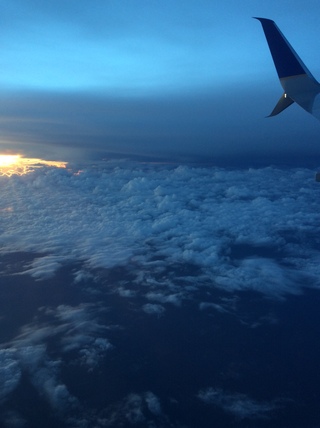 Photo by Carol Bergman
We got stuck in the Air Train at San Francisco Airport for more than a half-hour. Fortunately, we had landed at Terminal 1 and the doors had opened—fresh air. The train was crowded, travelers leaving, travelers departing, many with so many bags they could have filled a hangar at the airport. There were children, old people, middle-aged people, a pilot. The pilot debarked and started barking into his phone. I couldn’t hear what he was saying but he was not happy. There were no trains coming the other way. The trains run on a loop—one breakdown and that is it. Who designed this brilliant system that is run by a computer terminal without any human in sight?

People were quiet at first, then they/we started to talk. Where was the staff, the personnel? (Note the word person embedded in the word personnel.) An electronic voice informed us, every five minutes or so, that we would be moving within ten minutes. And then it thanked us for our patience. How did he/she/it know we were being patient? I had to pee, my husband had to pee, other passengers had to pee, I was thirsty. Should we get off, go to pee in Terminal 1, return to the platform in the hope the trains would be moving and we’d make our flight? Was there any other way to get to Terminal 3? Was there anyone to ask?

We decided to wait it out. We were already weary from a traffic jam over the Bay Bridge, the return of the rental car, and a big bill for gas. No gas station we could see ten miles out—those were the instructions from the rental car company, either a scam or weird instructions. And we had timed our arrival perfectly to buy some food before boarding. No such thing as a decent meal on a plane anymore or a flight attendant to smile and chat and be human when we need something such as a pillow. A pillow? Forget that.

So what are flight attendants these days? Are they persons? Anything more than servers and emergency personnel? How difficult is it to hand out plastic cups of water, for example? I imagine a day will come when there will be totally automated flights—no flight attendants, no pilots. Not far off, I imagine. And with this fantasy I would like to tip my summer straw hat to George Orwell and his novel, 1984. He imagined the unimaginable. Now we are there. Or here.

So I suppose this blog is about the dehumanization of our lives and our selves. All of which is to be resisted and defied by everyone and, particularly, by artists who cannot function without deep connection. When a FB feed tells me that I might know some people and then displays the faces of these people on my screen, I get skittish. There is no way they can know the people I know unless they scan my email. So of course there are surveillance and privacy issues, at the very least. Why would I want to be a FB friend with my mother’s lawyer? How does FB know that I have communicated with my mother’s lawyer? But there is her face on the “people you may know” thread. Is this a thread?

I spoke to our pilot as we exited the plane. He was at the cockpit door waiting for the passengers to squeeze their way down the too-narrow aisle, all PR smiles in his crisp white shirt, slightly disheveled blond hair and beer belly. He hoped we enjoyed our flight. He hoped we would fly the friendly skies again. I interrupted his script when I asked if he was the pilot I’d seen on the stuck Air Train. He said no, he wasn’t, he’d flown up from San Diego in his own plane. And he didn’t seem to know or care about our little ordeal on the Air Train. He avoided eye contact. He had no empathy. He was a robot.  Read More
Be the first to comment 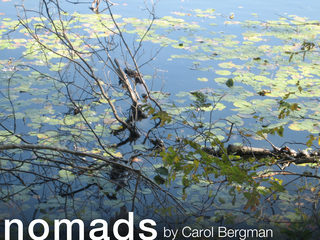 Cover Design by Chloe Annetts
I met Mykel, a writer friend, for a long, leisurely lunch with our actor friend, Josephine. We all taught English at a Japanese language school—Mykel still does—and we stay in touch. Mykel had been to my reading at the Cornelia Street Cafe in January, but had not paid for his book. He owed me lunch, he had said, and when we made a date for lunch, we half-jokingly reminded each other of the IOU.

It’s customary for writers to support one another’s work by turning up at readings and buying a copy of the book. It may seem quaint, but writers still sign books and personalize the signature at readings. I suppose this is more out of validation and vanity than anything else, one small way to launch a book. The reading is fun, all the rest of the publicity is annoying, time-consuming hard work. Nonetheless, we still do all of it—the reading and what follows.

Alas, on the day we met, I was not feeling well and ordered a glass of ginger ale, a cheap date. Mykel had not mentioned “Nomads,” whether he’d read it, or not read it, or what he thought about it. In truth, it doesn’t matter to me all that much. I know when my work is good or not and carry on regardless, but I do pay a bit more attention to what a writer has to say. I won’t solicit a comment, not after the book has been critiqued, edited and published. But I do listen. And what Mykel said confirmed—in a quirky way—the appeal of the book and my joy in writing it. “I hate to say this,” he began, “and don’t take this the wrong way, but ‘Nomads’ makes really good bathroom reading.”

Mykel is quirky himself—in mid-summer he wears big black work books, he’s traveled to over 60 countries and has friends in every one of them, he’s lived in Mongolia, Japan and Germany, he is a linguist and a musician as well as a writer, and he is very funny. So I laughed. Whatever he said, it wasn’t to shock me, it was a kind of compliment. Kind of, sort of. Because what he meant was—these are fast, short, self-contained, distilled stories. All of a piece, satisfying. And so I thanked him and suggested that he might want to try them at bed-time also. And to buy the second volume—“Nomads 2”—when it is published later this year.  Read More
1 Comments

I enjoyed Nomads and look forward to reading Nomads 2!