Honeysuckle: A Song for Maya 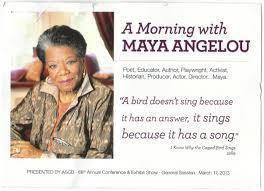 The internet is clicking with the announcement of Maya Angelou’s passing, a communal wave of mourning and tribute. A passing, not a death. Somehow, there’s a difference. We are forced to stop our daily activities and ponder her life, her contribution.

Like Pete Seeger, whose memorial I attended last week, her quotes are quotable, and she will be remembered for her pithy no-nonsense sentences, her courage, and her commanding presence. I saw her read once from one of her six volumes of autobiography and was mesmerized by the performance: a resonant voice unspooled rich prose poetry until it was alive in the air, a gift to the audience. Charisma.

Maya Angelou—and we can only say her full name, so iconic did she become in her lifetime—used the context of her personal life struggle within a rapidly de-segregating America as her subject. Is the work memoir? Not exactly. Autobiography? Not exactly. American history? Not exactly. Perhaps all three, and more.

On the question of courage, she never wavered. Courage and sweetness both. Write from the heart and the head, she suggested. Allow the memories to effloresce and transform into writing. Like the honeysuckle on the path, let the sweetness transform the harsh memory into writing. Let everything—the pain and the joy—become your Proustian madeleine.  Read More
Be the first to comment

The NYU campus in Abu Dhabi. The first graduation ceremony will take place on Sunday with President Clinton in attendance.


It was a shock to read the New York Times article yesterday about the harsh conditions the construction workers endured at the new NYU campus in Abu Dhabi. To turn away and say that we, the professors who work at the NYU campus in New York, did not know about the harsh conditions is no excuse. Because now that we do know, what do we think about it? How should we respond? The university has already responded with a long memo to its faculty, quoted in the New York Times today. They will pursue the allegations “vigorously.” Their record of labor conditions on the campus itself thus far has been a good one. The workers were hired by sub-contract companies. Oversight was negligent. And so on.

Though I am a mere adjunct professor, I consider NYU one of my employers; I have been working there since 1997. With the advent of educational globalization, conversation with administration has become fraught and challenging. Realization of major shifts in emphasis and expenditure dawned when the first Chinese students turned up in my creative nonfiction writing workshop. More than one still was having difficulty expressing herself in English. More than one had achieved a BA degree at an American university without any deep acquisition of the English language or, more importantly, a fundamental appreciation of unfettered discourse. Of course, I understand that overseas students will never be able to go back into a constrained and censored classroom, and that this is a good thing. But when I ask questions of other professors, I am sometimes told, more or less, not to ask questions--as in China, paradoxically-- and am politely reminded that there is ESL support at the university, the tuition of these international students is welcome, and so on. But mine is a writing class, I say. What are the other students to think?

Is globalized education a good thing? Should we be pleased? Or worried? If there is a campus in a country where there is no freedom of speech, how are we to proceed? NYU also has a new campus in Shanghai. What about that?

I am brought back to the dilemma of apartheid—boycott or engage?—and the dilemma writers face when one of our books is purchased in China, for example. My book about humanitarian relief workers, “Another Day in Paradise,” is about to be published in China for a second time using the simple alphabet. What if passages have been excised? Or rewritten? I would never know. Is it better to publish to keep the lines of communication open, or not? In the case of this book, I decided to publish. And I am, of course, delighted to have students from overseas in my classes and to afford our American students the opportunity of higher education anywhere in the world. But not at the expense of freedom, fairness, and the international conventions on forced labor—no better than indentured servitude in Abu Dhabi—and human rights.  Read More
Be the first to comment 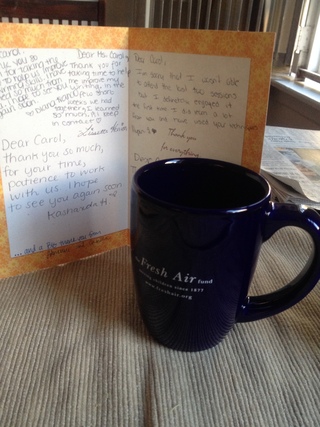 I recently completed a three-week writing workshop for college bound students at the Fresh Air Fund. Since 1877, The Fresh Air Fund, a not-for-profit agency, has provided free summer experiences in the country to more than 1.8 million New York City children from low-income communities. That’s their mission statement. But they are much, much more. Not exactly in loco parentis, but in parentis amplified, an extended family and a second home.

All told there were six smart and beautiful young women (no boys for some reason) who expressed interest—Lissette, Tia, Kashanda, Jalilah, Tia, and Diana. I want to name them here because their intelligence, poise, and determination are noteworthy, and I want to encourage them as much as possible. Obligation and weekend jobs—we met on Saturday afternoons in the Fund’s offices—interrupted attendance to some extent, but with email, text and FB friendship, we somehow made up the difference. I thought of them throughout our time together with great pleasure and admiration because these smart girls—and I will say it over and over again—don’t come from the same privilege as my NYU graduate students. Yet, they are privileged in other ways, first and foremost their connection to the Fresh Air Fund itself.

“Why are fanatics so terrified of a girls’ education,” asks Nicholas Kristof in his article in this week’s New York Times Sunday Review. And his answer: “Because there is no force more powerful to transform a society.”

Kristof is discussing the kidnapping of the smart girls in Nigeria, but the issues he raises are pertinent to every girl’s education, even in the United States. Girls often still have more domestic responsibilities than boys, and may not be expected to continue their education. It’s the glass ceiling at the microcosmic family level. The Fresh Air Fund college-bound mentoring program re-establishes the balance between family expectation, potential, and realistic aspiration.

I returned home from a Mother’s Day weekend with my smart daughter to find a package waiting for me. The smart girls had written me eloquent thank you notes and sent me a Fresh Air Fund mug. The mug is great, of course--useful and elegant-- but the well written messages were sensational. Any teacher knows how it feels to be thanked for inspiring her students and teaching them well. But our students also become our teachers. My heart is full of gratitude for what these smart girls have taught me, and in such a short time.  Read More
1 Comments

It is wonderful to hear that these students derived such positive experiences from your teaching. There is nothing more gratifying than making a difference in a student's life.

I am discovering this in more full measure with my private horn and trumpet teaching, and so your post is particularly inspiring. Thank you for sharing!

I Feel Your Mind 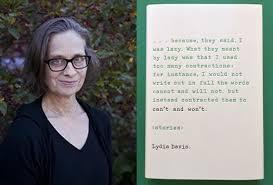 Discovering a new writer is always a surprise, especially as I consider myself well-read. Is this hubris? And how could I have missed Lydia Davis, not heard of her at all until I read the New Yorker profile in late March. She seemed instantly familiar, someone I might have chatted with for hours about her process—how she decides on a story, works just a few hours a day, has raised two boys, been married twice, makes use of the quotidian, makes use of people she knows and their conversations, always has a notebook in her purse to jot bits of dialogue, and so on. “I’m kind of always working in a sense,” she told Dana Goodyear in the New Yorker interview, “sitting and talking to my neighbors, I’m not really working, but I’m always sort of alert to things.”

Her work is not easily categorized, yet she won the 2013 Man Booker for fiction, fiction of just a few sentences, or a paragraph or two. Some have argued that they are prose poems? Are they?

Storytelling is problematic, explains Dave Eggars, who published Davis’ quirky stories in McSweeney’s before anyone. The sentences seem “handmade,” or “unmade,” or a “cool thing from an old junkyard.”

On the level of the words choices and sentences, Davis was admired by other writers before she had a lay audience, and now I know why; I have read a few of her sentences. They are precise, even cold in their precision. And they have an odd cumulative effect—restrained and compelling, restrained and funny. More so when she is reading aloud, as she did at NYU’s Writers House on Thursday night, part of the PEN World Voices Festival. I arrived late and grabbed a seat at the back behind a mirror, no line of sight at all, but a good loudspeaker. And within minutes I was laughing; I had become a fan.

Lydia Davis is an authentic and transparent writer who persists in writing without consideration for what is good for her career. She allows her readers to know her. She allows them to feel her mind. Whether she would have been published had she not been a translator with contacts in publishing, and had a first husband by the name of Paul Auster, is an open question. Somehow, I doubt it. Still, I am more than grateful that she has been published.

Discovering Lydia Davis has been exciting for me. Some years ago, I wrote similar stories and didn’t know what to call them, or what to do with them. A few were published, most are stored in my filing cabinet and on CD’s. Occasionally I add to the collection. Now I’m going to pull them out and have another look, and keep going with titles I’ve scribbled at the back of my journals. There has to be more than one writer like Lydia Davis who deserves to have her unconventional stories published. Maybe one of them is me.  Read More
Be the first to comment