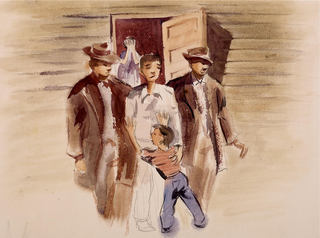 "And the FBI Took Him Away," by Gene Sogioka courtesy of his daughter, Jean Sogioka La Spina.
2018 is the 76th anniversary of President Franklin Roosevelt’s Executive Order 9066 which began the post- Pearl Harbor round-up and incarceration of 120,000 Japanese American civilians on the West Coast of America. Property was confiscated, families ordered out of their homes at gunpoint, men, women and children herded and then detained for the duration of the war into ten detention camps surrounded by barbed wire fences, guard towers, searchlights and armed military guards. Conditions were more than difficult, they were horrific. My dear college friends, John Tateishi and Carol Shinoda, never spoke about it. We were all English majors, we discussed Chaucer. John was my husband’s room-mate; both had served in the military, Jim in the US Navy, John in the US Army. The four of us, on separate coasts, married on the same day. Later, John and Carol came to live in London for two years while we were there. A long, abiding, friendship. How strange, then, that in its earliest days, Jim and I never knew about their family’s experience of the camps, that this painful piece of their back story, like my Holocaust story, had been expunged from conversation, or lay buried somewhere in our psyches and collective memories.

And then, one day, many years later, Carol mentioned on the phone—or was it in a letter?—that John was working for the Japanese American Citizens League, that he was in Washington DC as a lobbyist for the “redress campaign,” testifying in front of President Carter’s Commission on Wartime Relocation and Internment of Civilians, that, in fact, he was the director of that campaign which, in 1988, culminated in an apology from President Ronald Reagan and a reparation pay-out to all survivors and/or descendants of the mass incarceration. Truth and reconciliation. I often wonder if that model might be used for our African American and Native American descendants and/or, more immediately, for our Dreamers. But that’s a sidebar here, or perhaps a flash forward.

With formal, governmental apology and monetary albeit token reparations, John, Carol and others of their generation had found their voice. John eventually became the Director of the JACL, and Carol became the Director of the Bay Area Writing Project @ UC Berkeley, our alma mater. Both, by now, have written extensively about their histories which are still being excavated and expressed in a myriad of projects. John edited an oral history of the camps called “And Justice for All,” (https://www.amazon.com/Justice-All-Japanese-American-Detention/dp/029597785X) and Carol is now on the editorial staff of “50 Objects.”

First up in the year-long 50-Objects digital “journey” are paintings by Gene Sogioka, an established Disney cartoonist imprisoned in the Poston detention camp in Arizona. Using watercolors as his medium, he documented intimate, candid scenes of suffering and resilience, which have never been seen before. I thank his daughter, Jean Sogioka La Spina, for allowing me to use the image of a young boy resisting his father’s arrest by the FBI for this post. She has also collected the paintings into a book:

Sadly, they feel both resonant and current.  Read More
Be the first to comment

Just Tell Me When It's Over 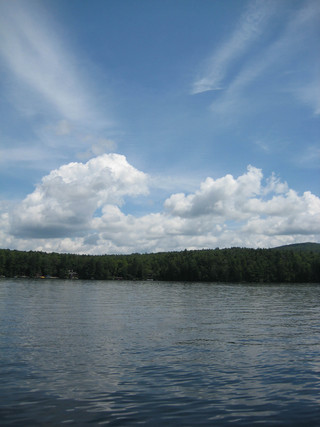 Photo of the Ashokan Reservoir © copyright by Carol Bergman 2018
This is Moby Dick’s update. He has identified the route of The Pequod and is flailing the fluke on his tail. It’s powerful, interlaced with tendons, his calisthenics supported by the pod, his body politic, and the protocols of the sea. He’s not a fish, please don’t call him a fish, he’s a mammal, protective of his young, his female nurses his young, and sings whale songs in a chorale of whales. Do not hurt Moby Dick’s young else they too will elevate their flukes and smash the boat as soon as they come of age, or even before.

Moby lies in wait. He knows from past experience that the captain—let him not be named precisely—will be found, wrung dry, or pulverized. Once time has unfolded, what remains of him on the gallows of history might surprise us. He will disappear into the firmament as a painful footnote.

Just tell me when it’s over, when the captain is gone, when his second leg has been devoured instantly, and nothing remains of him but shadows at midnight and, in the morning, a clear blue sky.  Read More
Be the first to comment 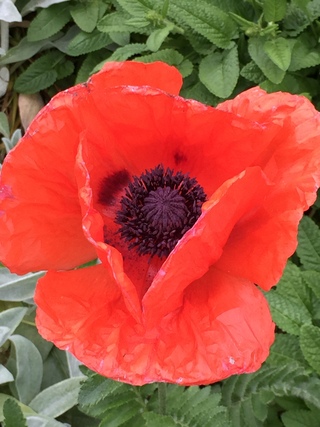 A photogenic summer poppy in Fort Tryon Park ©Carol Bergman 2017
My lawyer’s office manager just wished me a Happy Valentine’s Day. “If you care about such things,” she said, and giggled.

“Well, it depends. Not today. Maybe tomorrow. Maybe next week,” I said. “Right now I am thinking about my first NYU class tonight, a 331 page manuscript I am evaluating, running my car--no alternate side parking today, it’s also Ash Wednesday—pulling some cash from a local ATM that donates $1.19 to the Actors’ Fund—lots of performers in my hood—and buying some milk. I’ll walk up the stairs at 187th Street, the Mt. Everest of Washington Heights, my exercise for the day.”

I think she needed to get off the phone. I hadn’t even asked her my burning question yet: “When will the next invoice be sent out?”

“Okay, good,” I said, cutting myself short. “Have a terrific rest of the day.”

“Good? You are looking forward to the next invoice?”

My day had started well: contact with a friendly person. Connection. Shared humor. Writing is a solitary occupation and maintaining contact is fuel and solace. One reason, among many, I love to teach. And I just used the word “love.” Happy Valentine’s Day to me and all my students, past, present and future.

Who will be my next-- please listen to my story-- victim? Well, my husband is in his office working. I can hear him on the phone. When I’m not writing or talking on the phone myself, or reading, I start to accumulate stories, questions, ideas, worries that I have to be expressed or I feel as though I’ll burst. Performers, visual artists, writers—we all feel an urgency normal mortals do not share: an impulse to express ourselves publicly, to share our experiences, observations and opinions. We don’t hold much back, we don’t want to hold much back, so we search for the medium—based on our particular talent—that best serves what we want to say. We’re not always successful, but we try.  Read More
Be the first to comment 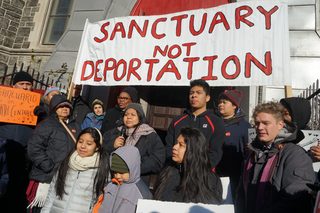 "He made a story for all of them, a story to give them strength."


I made the mistake of watching a CNN feed on my Facebook page early in the morning. A 39-year-old man who had been brought to America when he was ten, no crime or misdemeanor on his record, married to an American citizen with two American-born children, was being deported. I could feel the family’s scream in my teeth.

That day, I had planned to work on the revision of my novel which is set in pre-Revolutionary New York. I had stopped in the year 1741, months after a slave rebellion. A slave in the Franks household, a real family I am amplifying with my imagination, had participated in the rebellion and been captured. He was up for trial in front of Judge James Delancey. The judge had only two choices: execution or deportation to one of the British-held plantations in Jamaica, the most brutal slave plantations in the hemisphere, perhaps in the history of slavery. In other words, this slave was being deported to his death.

The same is true of many illegal immigrants escaping the gangs in Central America: they are being deported to their death.

Where are we now in our evolution as a humane society? How far have we progressed since Hitler marched into Vienna in March of 1938 and began redefining who was German and who was not, selecting and then deporting Jews, homosexuals, and political dissidents to transit camps before being gassed in the death camps? How far have we progressed since the Serbs decided that the Bosnian Muslims in the former Yugoslavia were less than human? Since the Hutus slaughtered the Tutsis in Rwanda?

No CNN cameras were rolling when the jackbooted soldiers ordered my grandmother, Nanette, at gunpoint to get down on her hands and knees to scrub cobblestones. She had been on her way home from work at the family-owned retail glove store near St. Stephen’s Cathedral.

Would I be exaggerating if I said that the ICE deportations are an analagous form of ethnic cleansing deserving of prosecution by the International Criminal Court? I do not think so. And just because these deported men and women disappear, never to be seen in America again, does not mean that we haven’t killed them or destroyed their families. And I use the editorial “we” here deliberately.

Bear witness, dear reader. Write your stories. They will give you strength.  Read More
2 Comments