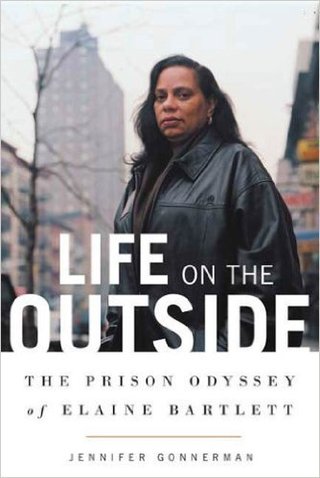 I have just finished reading Jennifer Gonnerman’s “Life on the Outside,” the story of Elaine Bartlett’s sixteen-year incarceration in Bedford Hills prison for selling cocaine, a first offense under New York's harsh Rockefeller drug laws. Unprepared for release at the age of 42 into a changed world and troubled family, the book rarely strays from Ms. Bartlett’s point of view. This is empathetic immersion journalism at its best. It’s no wonder it won the National Book Award and landed Ms. Gonnerman a job at The New Yorker. The reporting is encyclopedic and the narrative so gripping I could not put the book down. Considering the discourse we are having at the moment about incarceration and rehabilitation, I’d say it’s a must-read. Some of the harsh sentencing has been rescinded, but there is more reform of the criminal justice system pending, and more still that is necessary.

“Life on the Outside” reminded me of Katharine Boo’s Pulitzer-winning book, “Behind The Beautiful Forevers,” an intimate portrayal of the shanty-town under the airport in Mumbai. Ms. Boo, an American married to an Indian national, used translators—students from the university—to capture the story. Despite the language barrier, she became close to her subjects.

The reporting and narrative methods are similar in both books: immersion reporting, third person story-telling, and an epilogue in the first person that describes the reporting process and the reporter’s role in the process. It’s an approach shared by Tracy Kidder and Alex Kotlowitz, among others. I call it cinema verité writing.

In film theory, cinema verité is sometimes referred to as “observational cinema.” The camera/director is a fly on the wall recording whatever passes before him. There is no voice-over narration or guidance for the viewer other than the way in which the director frames each shot and edits the takes. It can be informative and powerful, it can be salaciously voyeuristic, or it can be boring.

Gonnerman and Boo’s books mimic this process. They are the camera eye observing, recording and framing, deciding on what goes in and what doesn’t. And, as reporters, they do ask questions, but we don’t hear their voice at all until the end. They remain behind the camera and behind the scenes.

Does this reportorial self-effacement work? Yes, for the most part. Are there drawbacks? Yes, one or two.

By the end of “Life on the Outside” I cared about Elaine Bartlett and felt I knew her. She loved clothes, she loved her children, she was a hard worker, she loved men, she was well respected. I wanted to keep her out of harm’s way and for her most successful child, Apache, to continue to do well. In this sense, the book succeeded admirably. But when subject matter is difficult, challenging, or controversial, the absence of a narrative persona feels like a lacuna. Many questions about our criminal justice system remain unanswered, solutions and interpretation are absent. Now, more than ever, we need them.  Read More
Be the first to comment 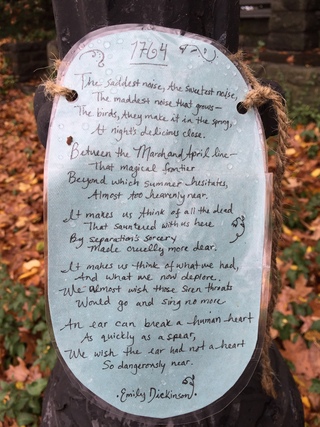 Someone left a poem by Emily Dickinson on a tree in Fort Tryon Park yesterday. To my knowledge, she never attended a writing workshop. Yet, she persevered. Thank you, Emily. Thank you, neighbor.
A student has dropped out of my class. She says she has scheduling problems but I don’t think this is the real reason. Class #5 and #6 are the most difficult: my students hit a wall. The wall is different for every writer and every student writer. We begin in a state of bliss, keeping our journals, beginning a piece of work, enjoying ourselves. A melody of language pours out of us onto the page, we are released, we are free, we are transported. But as all this happens, students are also becoming better at critiquing—and I am getting tougher. There is potential in the work and my mandate is to suggest ways to lift the manuscript out of discovery draft into a final draft—or project—strong enough for submission.

So the weeks pass and the critique becomes deeper and more telling. Where are the holes in the story? Why isn’t this sentence or paragraph working? In order to sustain self-esteem in this open, demonstrative environment, a writer needs courage, flexibility and patience in equal measure. Some students aren’t ready for this, or they get rattled, or refuse to listen and become defensive. We study what is on the page and how to make it better. That is all.

I make phone calls, have more discussions, write personal emails of encouragement. I do my best. Years of experience in the workshop setting have taught me a great deal about becoming a writer in the most existential sense. I watch with pleasure as my students begin to think of themselves as writers. And though I am deeply sorry when someone drops away, I don’t take it personally, and hope they will not abandon their writing lives.

A critique is not criticism. By creating a warm and considerate environment with firm rules, I can only do so much. The rest is up to the student: s/he has to meet the workshop, and the workshop process, half-way.  Read More
Be the first to comment

Girl Looking in a Mirror by Pablo Picasso
A woman approached me on the pool deck. “Hi, Carol. It’s good to see you. We missed you in class today.”

She was an instructor I have seen working in the warm, small pool for babies and “the elderly” many times. Her particular class is for women of a certain age who have stiff joints. She plays loud, funky music and was toting her boom box. Class was over and I’d missed it!

I may be a woman of a certain age, but I am a lap swimmer who once upon a time was a competitive swimmer. And my joints may be stiff, but I pay no attention. I don’t take classes and I had never talked to this instructor before.

So her approach to me was weird. “I don’t take any classes,” I told her.

That startled her. “Oh my, and your name is Carol? You have a Doppelgänger. Another Carol, similar build.”

I didn’t like this story, it made me uncomfortable. Not only did this Doppelgänger look like me, she had the same name.

I don’t want a “twin” who is unrelated. But I was also intrigued, albeit eerily so. In mythology—German, Norse, Egyptian—a Doppelgänger is an evil twin and harbinger of bad luck or death. No thank you.

I stuck with my intuition and didn’t take my inquiry further. I got into the pool and had a good swim. But it got me to thinking about—of all things—where we are in the universe and how all stories, in the end, are universal stories. Not just one of me? How could that be? Unique and individual and solipsistic as we are, we are not alone in this fucked-up world of ours. Read More
Be the first to comment