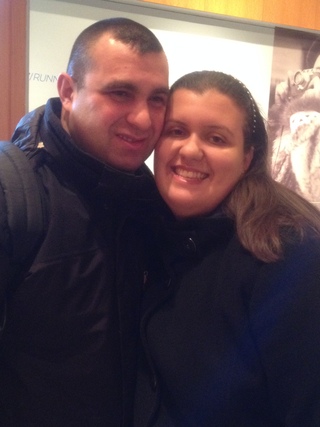 Seth Mintz and Jennifer Garcia. Photo by Carol Bergman
Jennifer Garcia and Seth Mintz met five years ago at special needs program at the Jewish Community Center in New York where I swim. The tall, handsome couple can be seen holding hands in the lobby as they arrive for their activities in the “Adaptations" program. I always greet Jennifer and Seth, both of whom are warm and well mannered. I shake Seth’s hand and give Jennifer a hug. Their obvious love for one another, consideration of everyone they meet and civility, makes me smile.

I had first met Jennifer at the pool where she collects membership cards, puts them in a metal file box, and then returns them to us as we leave. This is her job and she takes it seriously. She is a formidable young woman— friendly, attentive and caring. If I mislay my lock and have to bring my valuables to the pool deck, she will take care of them. If I forget my goggles, she will find me a pair of goggles. She wishes me a wonderful weekend and has asked about my life and my writing life. Often, I have stood dripping in my towel to have the pleasure of talking to her.

Recently, she told me that she belongs to a literary club in the Adaptations Program and has been writing poetry. Did I want to come to a reading? You bet.

The reading was last Sunday, one of the last before Christmas, so not as well attended as usual, Jennifer told me. I was her guest. She introduced me to her friends, showed me some art-work she had done, the buffet of healthy food, and led me to a seat in the front. Did I know she had Asperger’s? I did not. She is twenty-seven, and still living at home, but once she and Seth get married, they will move into an apartment together. He was there too, of course; he attends all her readings with devotion.

Jennifer was the first up to read, the first of four. She read a prose poem that begins with the phrase, “gone with the wind.” She hadn’t seen the movie. No drafts, she writes straight into her notebook—stories, poems, story poems—whatever comes to her. The assurance with which she stood at the podium and spoke her work clearly and slowly into the microphone was an inspiration. She is an inspiration.

The other readers were also incredible. Good stories, all well told, by brave writers.  Read More
Be the first to comment 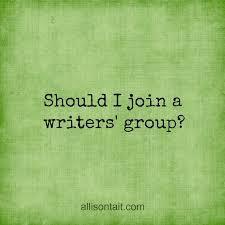 Years ago, when I decided to start my own professional writers’ group, I sent out an email blast to colleagues at two schools where I was teaching. I had numerous replies because writers are always grateful when someone else organizes a group. I culled the replies to a manageable twenty and then down to a short-list of ten. I wanted the group to be gender balanced and experience/publication balanced. I didn’t want any editors in the group, or writers who worked in PR or broadcasting. Editors cannot resist the red pencil, and if they are frustrated writers, they take liberties with the text that can be either intimidating or infuriating to the author. Public relations gadflies learn to homogenize and spin. In my experience, they lose perspective on what is authentic and what isn’t authentic. In an effort to reconnect with their own voice and subject, they are hyper-critical of everyone else and, ultimately, themselves.

It was my prerogative to be choosy; I was gathering the group. So I chose six people, all strangers, who I thought would work well together. Of course, I was wrong.

At first, everything went smoothly. We met once a month and had deep discussions about our work. We rotated round everyone’s house—another criteria—and agreed that there should be no food and drink to distract us; only water was served. Eventually we loosened up on the food and drink. We brought cookies, snacks and wine. Maybe that was the beginning of the end.

I was writing a lot of short stories in those days and the occasional poem. One month, I decided to submit an almost epic-length poem to the group. What was it about? I can hardly remember now.

Our last meeting was at my house where I felt—at home. I was very relaxed and eager for the arrival of my writer peers. After a year, they were beginning to feel like writer friends. Except for one thing: a feeling of competition between two of the writers who were hungry for fame. In fact, they were out of control hungry for fame. Fame and fortune. Such an intense appetite may or may not be good for the writing; it’s definitely not good for a writers’ group. Mea culpa, I hadn’t picked up this affliction during my phone interviews. Or, perhaps, I hadn’t even considered it.

So here we were at what turned out to be our last meeting. The critique began and it became uncivil in five minutes. I interrupted and said we needed to remind ourselves of the rules: A critique is not criticism. It is not personal. It is about the work.

I offered to be the next up to calm the tornado that had hit, and distributed my epic poem. After I read it aloud, I excused myself for a minute to go to the restroom. I could hear a churning sound, like a boiler about to explode, but when I returned to the living room, everyone had gone quiet. A copy of my epic poem was on the table face down. “It’s not even worth discussing,” one of hungry for fame and fortune women said.

“And I would like you to leave right now,” I said.

The group disbanded after that, not surprisingly, and I began another soon after which was much more congenial and successful.  Read More
1 Comments

I would be curious to know what made the second writers group more successful than the first. What did you do differently?