The Goldfinch; An Assessment 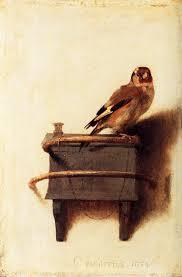 The Goldfinch by Carel Fabritius
Note: There are spoilers in this post.

My cousin wrote me a text during her vacation week asking me to read “The Goldfinch” by Donna Tartt so we could talk about it. She’s not a writer, she’s a visual artist, so she was drawn to the image of the famous painting on the cover of the book. Or maybe her daughter, an avid reader, recommended it But why was it so long? And why wasn’t she enjoying it? And why did it win The Pulitzer? It was ruining her vacation reading plans. At 775 pages, there wouldn’t be time for anything else. Should she finish it, or put it down? Is it compelling or manipulative?

Then a friend put up a post on FB: I just finished reading “The Goldfinch” and feel like I have to go into rehab.

Is this book a “turkey,” as some reviews have said, or a “masterpiece,” or a “flawed masterpiece?” Or, possibly, all three?

So let’s just say, for starters, that it’s a masterpiece. Surely, the Pulitzer committee can’t be wrong, right? The action sequence of the bomb blast in the museum is incredible—full of harrowing and sensory detail—and such a sequence is very difficult to write. It’s executed with precision in the American realist tradition. What’s more, the sentences are gorgeous, even memorable, as they often are throughout the book:

"I missed my mother. I missed her so much I wanted to die; a hard, physical longing like a craving for air underwater."

"It was a stillness I knew; this was how a house closed in on itself when someone had died."

"Often at night, when I was overwhelmed with the strangeness of where I was, I lulled myself to sleep by thinking of his workshop, rich smells of beeswax and rosewood shavings, and then the narrow stairs up to the parlor, where dusty sunbeams shone on oriental carpets."

"Because, here’s the truth, life is catastrophe."

But are gorgeous sentences enough when those sentences don’t lead us anywhere, or when they take us into detours so dark and cruel and nihilistic—all of life a catastrophe, really?—that it’s an insult to the curious, earnest reader trying to get to the end of the book to find out what happens to this boy? And do we believe his epiphany in the presence of his mother’s ghost? It’s difficult.

Is it a turkey? Yes, often. Like Holden Caulfield, Theo Decker is a very smart boy, but is he a reliable/credible narrator? Not exactly. Theo descends into serious addiction and alcoholism. He’s blotto or hallucinating much of the time and though the descriptions of these states are—again—gorgeous, how are we to believe anything he tells us? We can’t. From time to time Tartt reminds us that Theo is a high functioning addict. I don’t buy it. I don’t buy that he’s high functioning, or high functioning enough to tell this story to its sorry, impossible conclusion.

Is the book a flawed—sometimes—masterpiece ? Yes, definitely. It’s a page turner much of the time, but the fault lines in the plot are legion, the characters are well drawn or shallow (Hobie, for example), the descriptions vivid and beautifully written, but they go on and on and on until they become boring, or, dare I say, addictive.

Was the author addicted to her own masterpiece? Could she not put it down or let it go? She has been compared to Dickens and was a devoted reader of Dickens when she was young, but she is nothing like Dickens. He wrote quickly for serial publication—Tartt took a decade to write this book—and he had a social conscience, transforming his traumatic childhood into compassion for his characters and social activism. Sentimental at times, a hypocrite in his personal life, but he never manipulated his readers or left them on a limb wondering if they should jump, or not.

Though I am admiring of Tartt’s skill and perseverance, if I hadn’t promised two people I’d read this book, I might have pulped it. Fortunately, it is only on my Kindle where it will soon be transported into The Cloud.  Read More
Be the first to comment

I worked for BBC radio in England as a reporter for several years where every story was assigned a producer who framed the story and wrote the script. This producer, it was assumed without embarrassment, had a point of view, or an emerging point of view, as the story was reported. There were no restraints on anyone.

Re-entry into the American commercial media marketplace was a culture shock. Do we, in fact, have a free press when the advertisers signal their preferences to the editorial department for placement within a story—electronic or print? Once there was a firewall between the business/advertising departments and editorial; no longer.

I think of this conundrum at the beginning of every term especially if I have a Chinese student in my class, which is often these days. As I teach literary nonfiction, not fiction, I make a little speech about the writer/reporter’s mandate to develop a full-throated voice, to find the story and report it as thoroughly as possible, and to remain a transparent, credible narrator. I ask the Chinese students directly if they will be able to do this. They always say yes and then run into problems.

Such was the case with my thoughtful Chinese student last term. She wrote a story about an earthquake she experienced, but couldn’t tackle the government cover-up of the casualties. She side-stepped most of the story by keeping it very personal without straying too far from the dorm room where she had been living when the quake hit.

And so the discussion of her piece was interesting and a lesson for the American-born students, as well. How transparent are we? How credible? How do the constraints of the commercial marketplace determine what we write here in America? What gets published in the mainstream press and what doesn’t? We can’t be self-righteous about our so-called freedoms, we all decided, because we are not entirely claiming them. And we certainly have understanding for the Chinese students studying here and what they have to face—with a heightened awareness—when they return home.

But then the class was over and it was time for official evaluations which, sadly, are anonymous. I can’t remember when these evaluations started exactly, or why, but they are certainly being scrutinized now because they allow disappointed, truant, or cruel students to slam the professor without consequence. It’s as egregious as denouncements in a police state, though I am sure that was not the initial intention. Still, evaluations have been abused. Shockingly, a prominent Columbia University professor friend was denounced anonymously after 9/11 and followed by the FBI for two years, as was her son. She is originally an Israeli Arab but has been an American citizen for decades.

A couple of the evaluations I received from students at the end of the term felt like denouncements. I had used the class as a platform for my issues, one said, meaning what? My political point of view? I had been too harsh on the students causing one or two to drop out, said another.

Because only six of the fourteen students filled in the form, and only two were disgruntled, I should have ignored what they had to say. What use were such comments to me? None at all. But I was upset by them because the students hadn’t come forward during the course of the term to talk to me. They were not transparent, they were furtive. So I had to remind myself that, mostly, it had been a good term, the end of term self- assessment letters were wonderful. Everyone who had worked hard developed at least two stories, a writer’s group had formed, strong, well researched stories written. And each one had potential and a credible, transparent POV, including the revised manuscript from my Chinese student who returns to China this month. I plan to keep in touch with her via email and hope that our correspondence will not be censored. Read More
Be the first to comment