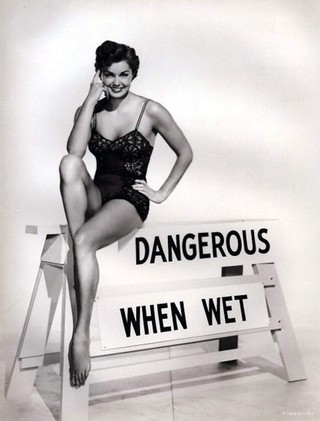 My husband tells me that the tea green non-slip mat I bought for the capacious bathtub in our new 1940’s apartment reminds him of 1940’s Esther Williams movies. She was my idol when I was a kid because I loved to swim and create water ballets à la Esther Williams and her collaborator, Busby Berkeley. Busby was not a swimmer so Esther visualized and scripted most of her water ballets. Films such as "Easy to Wed," "Neptune’s Daughter," and "Dangerous When Wet" followed a formula: romance, music, comedy, a skeletal plot and, most importantly, Esther in the water. The publicity men at the studio dreamed up those hot titles.

In my Esther Williams look-alike, be-alike days, I was always the choreographer—legs in the air, arms outstretched to create a flower, dips and twirls, handstands, water up the nose. And because I was the boss and the eldest, I insisted that my team—my cousin, Peggy, my friends—nag their mothers for Esther Williams swim caps, heavy with faux rubber flowers in pastel shades, and sexy swimsuits designed especially for pre-pubescent girls à la Esther Williams. They were expensive and baby-sitting money had to be saved.

And then one day, miracle of miracles, my step-dad took me to see the Aquacade starring my very own personal Aqua Star, Esther Williams. It was in a outdoor stadium somewhere on Long Island and it took hours to get there. And though we were sitting very far away and I could hardly see anything at all except the water, and Esther Williams was very old and might not even have been in the show anymore, I was completely happy. Swimmers were dames who looked sexy and strong all the time even when wet (or especially when wet), and they were imaginative and innovative because they wrote their own scripts to their synchronized swimming routines. However improbable, the scripts were original and a bit wacky, and so was I.

Esther Williams was a disciplined athlete who worked every day at her craft. She was scheduled to swim in the 1940 Olympic games in Tokyo until the war intervened. Seamlessly, like flipping in the lane, she segued to movies, a modelling career and business. She married—more than once—and had three children. And she kept on swimming. Though she died in 2013, the line of Esther Williams swimwear still exists, as does her website. I’m still a fan of her movies and she is still an inspiration: a free-spirited, hard-working, creative woman. My cousin Peggy and I still swim laps together. Peggy became an artist and I became a writer, but our first artistry—with an audience in mind—was in the water.  Read More
Be the first to comment 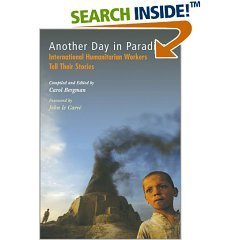 I participated in the arcane world of poetry and poetry readings for a while and now only occasionally will I write poetry (they surface unexpectedly) and attend a reading, usually when a writer friend is reading. Even when I took two classes—and enjoyed them—and shifted my narrative brain into thinking in images, I always drifted back to narrative and wrote mostly prose poems. I wrote a slew when I was working on “Another Day in Paradise; International Humanitarian Workers Tell Their Stories,” and they were—to a word—dark and surreal. No surprise that I needed this outlet to keep going on the project for two years. War games at the Geneva Headquarters of the International Red Cross: not fun. I published a few of these dark and surreal “poems,” but I never considered myself a poet. And I am always bored at poetry readings. In fact, I have strong opinions about readings in general. For starters, we know that they don’t sell books; their purpose is purely celebratory. Secondly, they go on too long, well beyond the ½ hour tolerance of most listeners who are present to get a look at the writer, ask embarrassing questions during the Q&A, and purchase a signed copy of the book which they can then sell as a collectible. Thirdly, most writers are incapable of reading their work well, thus the boredom factor intensifies. So when I was invited to read a poem at an Actors Helping Actors Equity Fund Raiser, I was hesitant but also flattered. (Aye, there’s the rub—the writer’s vanity.) So I agreed, and pulled out a poem with an animal or two in it as that was the theme of the evening: The Animal Kingdom.

To my chagrin, the roster was alphabetical. I am a B!!! The first reader, I suddenly realized, was an uninhibited ACTOR. She read a poem by Pablo Neruda and it was marvelous. I wasn’t familiar with it, but I was riveted. Every word was clear, the cadences perfect, the expression on the actor’s face pitch perfect to the subject matter. It was a performance as much as a reading, a reading performance.

Then it was my turn. Up I went. Dear Reader, I did my best. Fortunately, the poem wasn’t very long.

And the evening continued in this vein: actors reading poetry with expression and nuance and practiced, rich voices. Most of them didn’t even need the microphone. By the end of this delightful evening in which I heard well known poems as if for the first time, I had made a decision: I am going to invite actor friends to read my work at my next book launch party. I’ll sit back, relax, and enjoy the show.  Read More
Be the first to comment 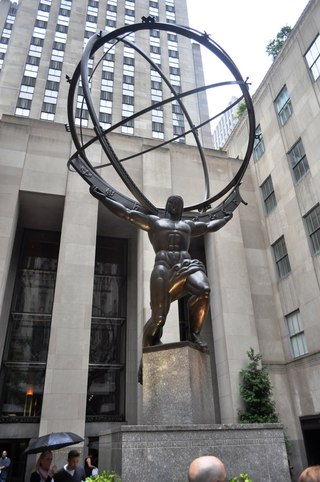 Atlas, created by sculptor Lee Lawrie with the help of Rene Paul Chambellan, was installed in 1937.
I went to St. Patrick’s Cathedral to hear a friend’s ten-year-old daughter sing sacred music in a choir. The cathedral is loaded with scaffolding inside and out, a $175 million restoration, but it is still impressive and cool on a hot New York summer day. There were a lot of tourists and security, hard wooden pews, and pulpits the height of redwoods. The young choir was dwarfed by the scale of the cathedral and their voices did not reverberate or echo; the choirmaster struggled for a bigger sound swooping his arms up and down in pointless gestures. After the congratulations and the thanks, the long blue gowns with sedate white collars were discarded, and the choir disbanded on the steps of the cathedral. In the distance: Atlas holding the world and a Jeff Koons topiary extravaganza called “Split Rock,” two monumental sculptures.

What does all this bigness—The Cathedral, Atlas at the entrance to The Rock, Split Rock—mean or portend? Is it designed to entertain, subdue, reassure? Are we awed in the shadow of these very big works? Do we long to escape to small spaces?

The Cathedral is a mid-nineteenth century edifice, its construction, like Central Park, interrupted by the Civil War, the seat of the Catholic Archdiocese of New York. Rockefeller Center went up in the midst of the Great Depression (another monumental historic event) and the Koons is a satiric display of commercial derring-do. At least that is how I read it. Here is an artist who can command the dollars to strut his work—anywhere. Is he laughing at us? Are we laughing at him? Is the work ridiculous or sublime? Can we even grasp a work this big?

And where can we go for respite in the midst of all this mid-town New York bigness? “Let’s cross the street,” my friend said. “There’s something you have to see: a department store for dolls.” Cars, pets, baby siblings, a hair salon ($20 per appointment per doll), a photo studio, a restaurant, bathroom stalls where there are doll “holders,” story books for every ethnically correct diorama, and all of it human scale and mesmerizing. Except for the $110 price tag on the dolls themselves.  Read More
Be the first to comment