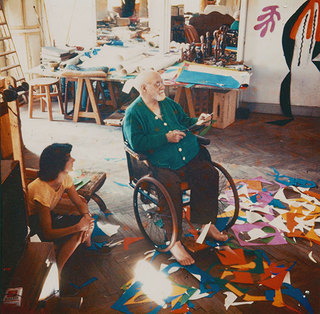 And what a joy it is.  Read More
Be the first to comment

Please excuse my two-week absence, dear reader. A big story fell into my lap, one I cannot ignore. It will take time to understand all the components of the story—not to be revealed here, not to be revealed now—and I'll have to continue researching and interviewing for a while, until Thanksgiving most definitely, perhaps longer. In other words, I have to do my homework before I begin writing. This can be both frustrating and exciting. Frustrating because I can't wait to begin writing; exciting because the project interests me so much that I awake in the mornings with paragraphs in my head. I rush into the kitchen, put the kettle up to boil, pull out a scratch pad and scribble. Usually more questions are raised; I make lists. Sometimes a sink hole in the story becomes a chasm that begs for repair. It was not evident the day before, but now it glares, demanding attention and renewed energy.

My students know that I am a working writer, not just a professor, and that I use my own struggles and writing life as example for them to emulate or reject; it's up to them, of course. And what I am modelling here, I hope, is the necessity of raising one’s knowledge base, another phrase to describe doing one’s homework. Because of our increasing reliance on Wikipedia, raising our knowledge base is not as obvious as it seems. Convenient, fast, helpful, it is always best to follow up on all the leads embedded in a site, to ask one more question, and read one more article.

How do we know when our homework is done? That’s difficult to answer because in a way it never is. Perhaps we’ve got a deadline, or come to a dead end in our research, or feel that the armature of the story has surfaced. Okay, good, time to gather our thoughts, and write.  Read More
Be the first to comment 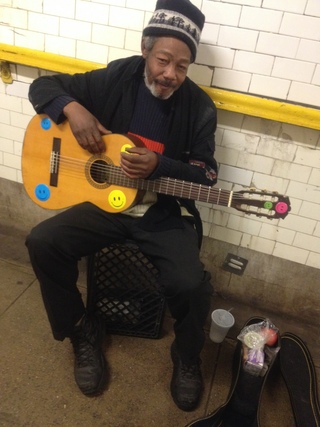 Photo by Carol Bergman
I had never stopped to talk to him though I had noticed him. It was impossible not to notice him as he was sitting on a milk crate strumming on his guitar and singing "Let It Be." He didn't seem to have another tune in his repertoire. And it was annoying because the passage from Overlook Terrace to the turnstile is a long one, cavernous, the acoustics perfect for musicians. There have been several: a flute player was my favorite but the "Let It Be" Man" had upstaged him, and he never changed his tune. On some days it sounded more melancholy than other days, a slow rendition.

He was stooped, his beard and hair frazzled. But his clothes looked clean and the guitar was shiny. I ran past as he kept on strumming, never a different song.

Days passed, months. Like everyone else I rushed down the passageway, I heard a train coming—isn’t there always a train coming?—and I never stopped, never put in any change in his guitar case, and I just thought of him as a him—nameless , a fixture, and an annoying one at that. He disturbed my rush to get somewhere. Who was he? Why was he there? Was he homeless?

Everyone has a story, everyone is deserving of attention, I thought to myself. So, one day I stopped. It was on my way back from somewhere so I had time. But more than that, the "Let It Be Man" had stirred my conscience. This is a journalist's affliction, a writer's affliction. I had to give him a name, hear his story.

"I notice that you like The Beatles," I said to him.

"I love the Beatles," he said.

I wanted to suggest some other songs, but didn't want to hurt his feelings, or complain about the repetition. Perhaps there was something wrong with him, but what? He was smiling ear to ear, and sitting up on the milk crate as straight as he could. Seventy-five at least, I thought.

"So what brings you to this passageway? Do you live in the neighborhood?"

"No, I live in Queens, but my Dominican musician friends do and they told me about the acoustics here. So I come to practice. We're going to make a CD together."

"And you have an accent, where are you from originally?"

Then came the introductions. We needed names before we could continue. A big story was sure to follow; anyone from Haiti has one. I knew he’d a hard time when he told me he was only in his late 50’s; hardship scars us physically and emotionally. But Gary--how relieved I was that he had a name--was ebullient and clearly happy to have someone to talk to, however briefly.

And then I promised myself that I would never pass him by without a greeting again.


Dedicated to Brandon Stanton, blogger and photographer, whose “Humans of New York” now has 10 million followers on Facebook. http://www.humansofnewyork.com/  Read More
Be the first to comment