History is Sudden, Poetry is Kind 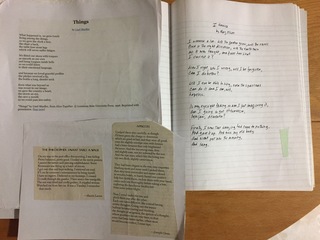 Pages from my personal poetry anthology: handwritten, printed, clipped.
Oh, how the mind wanders, connects, obfuscates and clarifies. Not necessarily in that order and mostly when I am moving, usually in the water, sometimes on dry land. This strange juxtaposition of thoughts occurred to me on the A train yesterday. I had been reading Philip Roth’s “American Pastoral,” a prescient and disturbing book. It’s my second Roth in several months. First up during the election was “The Plot Against America,” also prescient and disturbing.

Though Roth overwrites and his machismo grates, I have never put down one of his books. His most recent—shorter—books, “Indignation” and “Nemesis” are masterpieces.

Page 87 of “American Pastoral”: “People think of history in the long term, but history , in fact, is a very sudden thing.”

That thought has stayed with me all week. But how did it connect to “poetry is kind?”

The progressives among my readers will understand: we’ve been hit by a 2x4, e.g. “history is sudden.” And even those more centrist will agree, we’re headed for a bumpy ride. Every day there is more bad news about an inappropriate, dare I say—cruel-- appointment to head a government agency. Worse, this election, like the 2000 election, may have been stolen. As I write this morning, President Obama has announced an investigation into Russian cyber interference. The accusation is no longer “notional.” It is certain.

Now for the second phrase: poetry is kind. What do I mean to say? That poetry is consoling, most probably, particularly in a confusing moment in history or our personal lives.

I have been collecting poetry in a designated notebook ever since I joined a writer’s group with three poets. I had been working as a free lance writer for Holt Rinehart & Winston and one of my editors there was trying to write fiction. So was I. She was starting a writer’s group and asked if I’d like to join. “What about a couple of poets?,” she asked. I think my only thought was: why not? I was in for some big surprises.

Unconcerned with linear narrative, poets think in images and connect ideas as, yes, juxtapositions, just as I have here today. My linear narrative prose illusions were shattered and I began to write more freely. It was grand. Since then, I’ve returned to reading and writing poetry regularly, sometimes daily. I have a poetry app on my electronic devices and continue to build a personal anthology. But when I mention the word “poetry,” to my students, they often glaze over.

They are mostly young, eager and thoughtful. To a person, they were hit hard by the election, hope shattered. They were shocked one week, angry the next, a predictable cycle of grief. Then came depression, a subdued entry to the classroom, nearly catatonic. So, this week, I brought in some poetry and read a selection for thirty minutes before we got to “work” critiquing their manuscripts. “Let your mind drift. Relax,” I said. I assigned prompts from lines in the poems—two minutes each. “Try not to ‘think,’ I said as you read what you’ve written aloud.”

I don’t know if the poetry and the prompt exercises helped. I hope they did because I care so much about my students and their progress as writers. And I feel strongly that older adults—parents, educators—have an obligation to be supportive guides in grave and challenging moments. We have more perspective, more experience. But if my students needed reassurance, I did, too, of course. By encouraging them I was lifting my own spirits. In the end, we shared our wisdom, our resilience, and the life-affirming poetry I had brought to class.