Welcome to the Dragnet 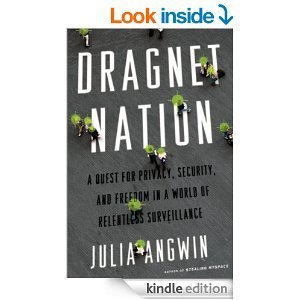 Julia Angwin, an award winning former Wall Street Journal reporter who now works for the independent news organization ProPublica, signs the flyleaf of her recently published book: “It’s an honor to be caught in the dragnet with you.”

Like several investigative journalists these days, she is concerned for the safety of her sources, many of whom are whistleblowers who may very well lose their jobs if they talk. The safeguards for Federal whistleblowers are nearly non-existent so Ms. Angwin is constantly searching for unorthodox ways to set up meetings. She sends snail letters, buys burner phones, uses secure electronic drop boxes and Duck Duck Go as her search engine.

Snail mail is cumbersome and problematic for a reporter working to deadline. On a recent trip to Washington DC, some sources didn’t answer her burner phone because they didn’t recognize the number. Several appointments fizzled. And this is one of many frustrations for journalists since dragnet data collection and other new technologies have outpaced our understanding of their damaging effects to the free flow of information in our democracy.

And what does this data collection consist of? Everything and nothing. And this is a paradox, of sorts. We release information to the cybersphere but have little knowledge of the day to day lives of many in our neighborhoods, in our country, and elsewhere. How many Indians know about the poor people behind the retainer wall next to the airport in Mumbai? There are 90,000 of them, collecting recyclable garbage from the airport hotels. It took a reporter, Katherine Boo, to expose the corruption and disdain of the Indian government in her Pulitzer Prize winning book: “Behind the Beautiful Forevers.” I am just reading it now. I had no idea. I was blind and ignorant of this horror on the other side of the world. So, yes, drag the net and collect data—which costs billions by the way—and then--is it asking too much?-- do something with it for the common good.

Should all writers be concerned? The answer is yes. Should all citizens? Yes.

These rhetorical questions were addressed on Tuesday night at Fordham Law School by Ms. Angwin and a distinguished panel moderated by Suzanne Nossel, the executive director of PEN American Center. Unlike other in this series, “Balancing Security and Social Justice,” the audience was a bit sparse. True, the weather was balmy, spring in the air, but I worried that the 24-hour-news cycle’s interest had waned. It would pick-up again if Edward Snowden returned to the US, was arrested and indicted. Hero or traitor? The arguments on both sides are fraught and heated. But at least we won’t be tossed into jail for arguing.

And that is the point, or one of the points, so far as I am concerned. Now that dragnet surveillance of both our trivial and important “information” has been exposed, we are able to talk about it, write about it, and attend panel discussions. For this basic human Constitutional right, we have to thank our Founding Fathers, and Benjamin Franklin, one of our first whistleblowers: