Behind the Beautiful Forevers: Reading Back to Front 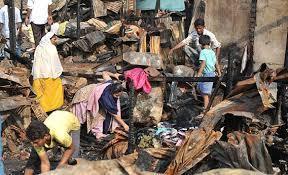 The residents of Annawadi picking through garbage for recyclables.
I have just finished reading Katherine Boo’s Pulitzer Prize winning masterpiece of narrative immersion journalism, “Behind the Beautiful Forevers.” It took me much longer than I expected—more than a month—as the story is so unbearably vivid that I had to alternate reading the book with other things. The clack of the subway was the easiest venue for me to read, not really a venue, but a moving, incessant, underground dystopian universe.

Indeed, the only way I could finish reading the story was back to front. There, in the final pages, I learned the fate of the a troubling trial in a corrupt judicial system, and I found Katherine Boo’s voice in an acknowledgment and an author’s note. In the preceding chapters, she had chosen to use a third person omniscient narration—to eclipse her presence she writes on her website—and focus entirely on her subjects. I understood the intention, but also missed the knowledgeable reporter’s mediating presence. Over a period of four years, Boo had used three indigenous interpreters and their observations had clearly been folded into the narrative, all of it so raw, I felt undone.

No tragedy or trauma is analagous and I do not mean here to compare in any way the travails of New York urban life--the beggars and homeless people on our subways, or the men and women scavenging for plastic water bottles in our garbage pails--with Mumbai. But reading the book underground, and then back to front so I wouldn’t worry so much about the children, afforded me a touchstone of awareness about what I am observing in my own enviornment. There is so much to report on wherever we reside—fugitive, precarious lives we cannot ignore.