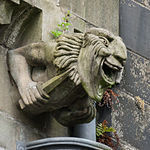 A gargoyle from Paisley Abbey, Scotland
We were waiting for the ferry to Seattle in Victoria, BC. The weather was not cooperating and the ferry was delayed. Plans disrupted, family waiting, we were frustrated and annoyed. But what could we do about the weather? Nothing. I was traveling, in part, to promote a memoir I’d written about my mother’s family. It was a genocide story and not an easy one. My nerves were on edge and I needed my husband close by to calm me. I’d also had a series of counseling sessions before leaving New York.

Across the street from the harbor was the Grand Pacific Hotel, a Victorian hotel on a grand scale with gargoyles around its perimeter and dining rooms the size of cathedrals. We treated ourselves to an Indian buffet lunch which we savored until the weather cleared and the maître d’ announced that the ferry was running again. But the ugly gargoyles on the perimeter were a reminder that life takes unexpected turns and not all of them are pleasant. Some, in fact, can be difficult, even traumatic. Shall we write about them, or not?

Every term I have someone in my workshop who has had a particularly difficult or traumatic experience and is burning to write about it. I have had students who lost a dear one 9/11, or have been raped, or have witnessed atrocities in war zones. These unwanted, distorting experiences provide the passionate internal energy needed to begin work, but they also can re-trigger the trauma or, even worse, PTSD. All artists have heightened sensitivity and awareness. But we don’t want to become gargoyles.

As a writing mentor, I have to recognize demons when they surface and encourage their expression in an artful, disciplined form. I also have to protect the writer from more trauma by insisting s/he has psychological support as s/he works.

There is also another hazard: traumatic stories may obliterate all other stories within the writer and, sometimes, within the workshop. Those who have less dramatic narratives begin to wonder if they have anything worth telling. Of course they do.