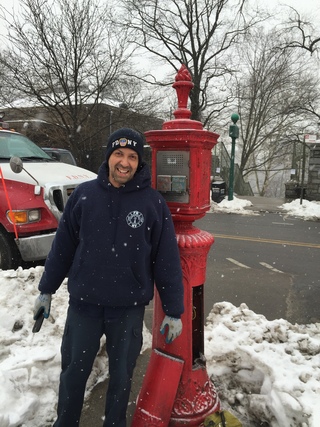 Edward, Communications Technician, FDNY. Photo by Carol Bergman
I was walking in the light snow late this morning when I spotted a FDNY Communications truck. What kind of communications?, I wondered. I had never seen a truck like this before. I put down my groceries and waited. There was a story here, that was obvious, and I am forever in search of a good story.

A handsome young man with Fire Department logos on his shirt and hat emerged from the truck with a sack of tools which he placed at the base of what I now know is an Emergency Rescue Service box, or ERS Box for short. The cover on the base of this nearly one-hundred year old structure was open to fresh new wiring that needed some fixing. Rather than scuttle the solid housing, they have been refurbished and rewired. History preserved. All of them are now hooked up to a central computer, and when one falters, the repair trucks are sent out pronto. They are now an important tool in the city’s emergency preparedness; if cell phones and the internet go down, these boxes will still work. There are more than 5,000 in all five boroughs of the city. Breathe a sigh.

Of course, I was as interested to hear all this as Edward, the technician, was to tell me about it. He was an articulate and voluble story teller, as are most ordinary people. According to Stephen Pinker in his book, “The Language Instinct,” we are hard-wired to speak, and by extension, we are hard-wired to tell stories. Electronic media short-circuits this hard-wiring with sound byte communication which is not good for writers. But a return to long form oral storytelling is good for writers. And though Edward had his cell phone on one ear as we were talking—his supervisor I hoped, not his girlfriend—we were conversing in long, narrative sentences about the Mayor’s recent snow-storm shut-down of the city, the perfect opportunity to test all the emergency services, including the ERS boxes. “We need to do this,” Edward said. “New Yorkers are always complaining, but they shouldn’t complain. Just last week, a woman was attacked, she pressed the fire button—there is also a police button—and the fire truck arrived in minutes. The attacker fled. I’ve been thinking about her. She was almost raped. This work I do, it’s important.”

Edward, thank you. This blog post is dedicated to you and all the other emergency service workers and first responders everywhere.

Wonderful story. These emergency boxes are a fascinating part of history, and it is gratifying to hear that they continue to play an important role in the city.