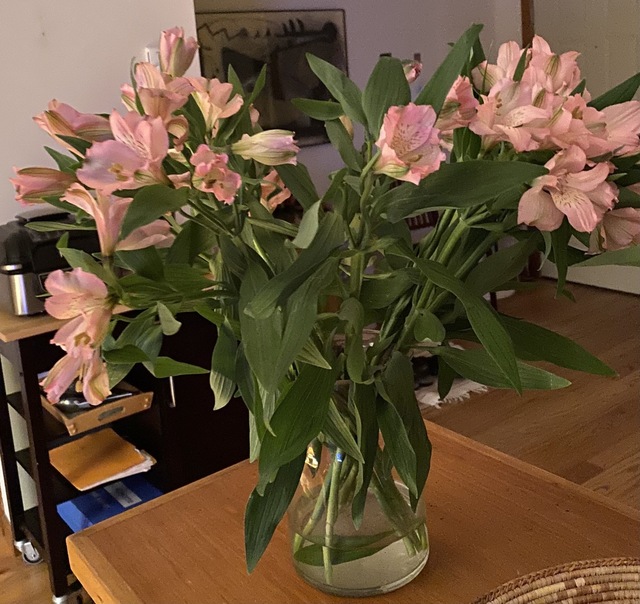 With thanks to Lindsay DuBois Kraus and Alan Kraus for this beautiful birthday bouquet.

I was talking to my college friend, Dr. Stephen Goodman, a frontline worker all these past months, and he told me that he was sorry I'd ended Virus Without Borders. Had I ended it? He wasn't sure. Nor was I, as it turned out. I'd had a week of endless work-related distractions, most of them unpleasant, and the grounding of writing a VWB post at  the end of the week was missing. I had tried writing a "regular" post about returning to fiction, rereading a couple of novels to prepare for a new writing escapade, but nothing worked. I was stuck, not blocked, but stuck. Fully vaccinated, I'd assumed there was nothing else I had to say about the pandemic and that it was time to move on. But we are not finished with this plague, far from, and there is a  lot more to say about it, a lot more to document. Just look at the numbers, consider the variants, think about the scramble for vaccines, the insanity of governors re-opening their states completely, the  re-opening of public schools. I will be back in the classroom in September. Will it be safe? Will I be teaching with a mask on, or off? Will the union committee I am on insist on proper ventilation before we re-enter the classroom? And so on.

It's as though we've escaped from a war zone but are still inside the war zone, hampered, trampled, halfway home but still at risk. Sitting outdoors at a café with a couple of local friends, celebrating my birthday with a decaf  latte, skim milk, and a vegan chocolate chip cookie, we raised our arms in a hallelujah, and beyond one singular birthday, celebrated all our birthdays, and our survival. Then we tried to figure out what we could and could not do now that we are fully vaccinated. Our children have not been vaccinated and are still super cautious, hyper-vigilant at times, as they must be. And though we see an ending, beyond the false ending we are now living, it will not be definitive like a light switch going off. Closure maybe, a return to activity, and an assessment of the economic, political and personal challenges that lie ahead, but not a definitive ending and a return to what some call "normalcy." No, life will be different, that is a given. And though the plot seems to be heading to a conclusion, dear reader, there's still more to the story.