When My Fitbit Talks to Me 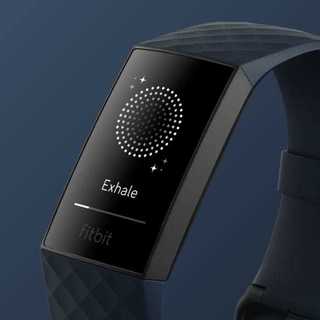 We become what we behold. We shape our tools and then our tools shape us.

My husband bought me my second  Fitbit for our anniversary. The first one died just out of warranty several years ago and I didn't replace it. And though, in general, I resist tracking, and don't need incentive to exercise, I'm enjoying my new and improved Fitbit.

Does it matter that I am being surveilled from afar? Yes and no. I find it interesting that, except for the step counter, most of  the functions stop working when I am indoors, hidden from the eyes of various satellites; they click in again when I am outside. Therefore, it follows, that when the GPS is fully engaged, Fitbit, despite disclaimers and promises, knows exactly where I am a lot of the time, and is selling this information to someone or other somewhere. Does this matter? Not to me. Not one whit. I'm not a rapacious consumer and really don't care.

I have a cousin who keeps her Fitbit on at night. It lets her know how she is sleeping and if she still has a heartbeat. Of course, she has to wake up in the morning to find her pulse underneath her Fitbit, which has already recorded her spectral data. Let sleeping bones lie, I say, without the intrusion of yet another electronic device.

My husband wisely chose a fashionable black Fitbit. It's very thin and light, and goes well with everything I wear, which is mostly work-out clothes now that I live far away from glamorous urban streets. And it talks to me, or sends me messages, white letters on the black screen. Forgive the paraphrases as I barely read them, though I know they are designed and written to affirm and reinforce my efforts:

Time to get ready for bed.

You've really accomplished something. Give yourself a hug.

The first time I took my new Fitbit into the pool I forgot to start the swim function. That's what I told myself. In truth, my glasses were packed away and I couldn't see it. No worries! When I checked the app on my phone, the app and the Fitbit  perfectly synched, Mr./Ms/Mrs. Fitbit told me, in so many words, that it/they/him/her/he noticed I'd been swimming. Well done!

We all need reinforcement, so they say. Not me. I'm reinforced enough. Mostly I am enjoying my Fitbit because I can see the time, albeit only when I am indoors, I can praise myself for reaching my "goals," which are more or less the same every day, and I can admire the way the really cool wearable electronic device looks on my wrist.

Your post reminds me of the time I questioned my father as to why he was wearing a watch that didn't work anymore. He said, "I like the way it looks on my wrist," and (you all know this one), "it tells me the correct time twice a day." Can't argue with that!

Maybe you can program it to get you up in the morning with an exhortation like that French aristo had his servant utter: “Mme Bergman, levez vous. Vous avez de grand choses a faire aujourdhui.”

I just got a Fitbit too! I find that it's fun to get the data and although I don't need much motivation to exercise it does help motivate me to get those few extra steps to get to my goal each day.:)