What I Am Reading, What I Am Trying to Read 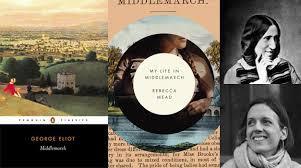 1. “My Life in Middlemarch” by Rebecca Mead. Mead is a reporter for The New Yorker, born in England in a small provincial town much like Middlemarch, and she came to my rescue as I was trying to read the novel for the umpteenth time, and failing abysmally. Perhaps if I read Mead’s book, I thought to myself, I might enter this challenging novel at last and inform my niece that I have done so. She belongs to a “classics” book club and is well ahead of me with that list.

Mead’s book is part memoir, part literary analysis, part bio of George Eliot. It’s well written and interesting, but whether I’ll finally be able to read “Middlemarch” itself, I do not know right now. Or, perhaps, I could cheat and say I have read “Middlemarch” because I have learned so much about it from Rebecca Mead. Not likely.

2. “The Bostonians,” by Henry James. Having failed with “Middlemarch,” I turned to another 19th century tome with greater success. This surprised me; I have never been able to read Henry James even though my husband was named after him by his journalist father. (We call my Henry James Jim for short. The 19th century Henry would not have approved.) Well, this is not exactly accurate. I did read “Portrait of a Lady” in college. I can’t remember a word. So how did it happen that I should attempt another Henry James? Well, I was upstate at my daughter’s house where I keep a small library of books and needed something to read slowly—slow reading I call it—before going to sleep (the e-books are too speedy at bedtime) and there was “The Bostonians” on the shelf. Fortunately I wasn’t too tired to get the cadence of James’ long sentences that first night and, before long, I was swept up in the story of New England suffragettes and, more importantly, sequestered homosexuality. Henry James was gay. This I learned from studying Edith Wharton and John Singer Sargent. And the book is loaded with allusions, attractions, rapture, commitment, jealousy—all woman to woman for safety sake. Please forgive me, dear reader, but I see Henry James and his struggles in his protagonists Olive and Verena. What an odd couple!

3. “A Son at the Front” by Edith Wharton. Published in 1922 and dedicated to two friends she lost in WW I, Wharton describes in scintillating descriptive detail what it was like in Paris during the war. She had been living in Paris, was already a successful author, and became a war correspondent for two magazines, traveled to the front, and was active in relief efforts for wounded soldiers and their families.

This is a reread for me as Wharton’s stories and sentences never disappoint me. I didn’t start reading her work until about ten years ago and I go back to them time and again for inspiration, psychological insight and entertainment. I had wanted to read this one last year—the 100th anniversary of the beginning of WW I—but was too busy with other things.

We are still a nation at war and probably will be for some time. Soldiers returning from Afghanistan, their families, all of us. This book resonates.

4. “Netherland” by Joseph O’Neill. Such an interesting writer—half Turkish, half Irish, raised in Holland. This is his first novel gifted to me by a friend just yesterday. I started reading it on my long train ride home and was riveted from the first paragraph. It’s a 30-something story and I am no longer 30-something (no one is for very long) and so I find some of it boring and predictable and I am not that interested in cricket, I am interested in this writer and how he is making this story. I don’t know if I’ll finish it or not, but I’m pleased to have been introduced to him. His new book is called “Dog,” set in Dubai (now that is interesting), and he’s also written a memoir, “Blood-Dark Track,” which is definitely on my list because I am so interested in O’Neill as a writer.

That’s it for today dear reader. Would you add your current reading escapades here, please, not just titles, but annotations—how you found your way to the book and why it resonates, or doesn’t? Many thanks.  Read More
2 Comments

I just finished reading "1Q84" by Haruki Murakami. It's a hefty read at 900+ pages, but well-worth the effort. The prolific Japanese author was born in 1949. This is the first book I have read by Murakami, recommended by a violinist friend Ellen. She often posts her book recommendations on Facebook.

I enjoyed "1Q84" because it stretches reality; almost science fiction. Murakami makes it all believable, and the reader is swept up in the plot. No small accomplishment for being such a long book! (Ellen mentioned that it's been re-leased in the form of three separate novels, for easier digestion.)

I have always been fascinated by translations, how the writers try to stay true to the author's original prose. This one seems very elegantly written, and the Japanese language still somehow manages to come through in the English translation.

I will definitely check out Murakami's other works. This was an excellent read.

Thank you, Cameron. I am a Murakami fan, have been for a while. His short stories often appear in the New Yorker and I also have read his book about running; he is a marathon runner. He spent some years in New York and speaks and writes English, participates in the translation. And music and dreams both inspire his work.

His latest is hefty indeed. Well done, Cameron. I haven't read it yet.