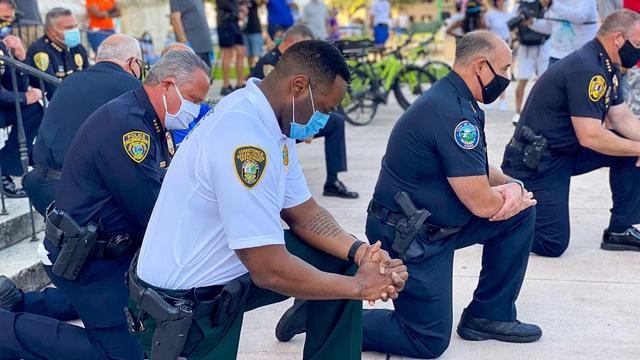 San Francisco 49ers quarterback Colin Kaepernick sat, and later knelt, during the anthem, before his team's 2016 preseason games. Since then "taking a knee" has become an emblem of resistance and protest for the Black Lives Matter Movement, and a controversial gesture of solidarity by police officers. This photo was taken by Roy Ramos, a reporter for WPLG in Coral Gables, FL.

A Police Officer Takes a Knee

Hateful to me as the gates of Hades is that man who hides one thing in his heart and speaks another.

I was driving a back road in this season of falling leaves on the way to my dentist, the radio silenced, and no other cars in sight, when I remembered an undercover New York City Transit policeman, the boyfriend of an acquaintance, a caring individual. I wondered whether he'd retired, or was working the frontlines in the pandemic. I imagined him confronting protestors at Black Lives Matter demonstrations and suddenly "taking a knee" in the gesture of solidarity many police officers have made in recent months. He would have been capable of that brave gesture.

Memory spurts are unpredictable and unwieldy. What triggered this? I haven't been in touch with this guy for many years, but the image of the bulge in the small of his back as we walked the streets to a restaurant in our neighborhood one warm, spring Sunday afternoon has stayed with me. I had never noticed it before. As we stopped at a light, I couldn't resist asking if he was packing.  "Yes," he said sotto voce. Neither his girlfriend, nor my husband, had heard the question, and no one except for me seemed interested in his answer once we were seated at a table and I started my interrogation. That simple "yes" wasn't enough for me:

"Why carry when you are off duty?"  I asked.

"Because there are predators everywhere," he said.

I looked around the restaurant.

"That doesn't mean they are not there."

"Have you ever fired your weapon?"

"Have you ever killed anyone?"

"Did you feel remorse?"

"Have you had nightmares after discharging your gun?"

So maybe the trip to the dentist was the trigger. He's an excellent dentist, an artisanal dentist, and I am grateful to have found him. But his banter as he's working on my mouth is often politically far right of my center and all of it feels dissonant and unexpected. Of course, mouth open wide, there is no way I can respond, and I always want to respond. Did he say that the socialists will be looking for trouble as the election looms? Has he ever met any socialists he considers troublemakers? Have I? And so on.

Often, we meet people who confound us, whose background and working life is so different from our own that we struggle to find a place to meet, metaphorically speaking. And, so it was, with the transit cop. And, by the way, he referred to himself as a cop, so I will use that shortcut here even though I know that we were, at times, speaking a different language. "You see predators?" I asked him more than once that day. "I see ordinary people enjoying their Sunday afternoon. I see the bulge under your sweater in the small of your back. I worry a stray bullet may kill me or a bystander."

He was uncomfortable with my questions, and looked as if he was going to cry. He was afflicted, troubled. What he felt—in his heart—and what he had been taught to see and do were not in concert much of the time.

My recollections went into double loops as I was driving. I remembered an Iraq vet I had interviewed. He was from a modest background, and he'd been looking forward to completing his education after his commitment ended. But PTSD had wrecked his plans. He, too, was a sweet-natured guy who had been taught to kill, and he was tormented. The nightmares wouldn't stop.

The police officers in our towns and cities who have been issued military-grade weaponry and riot gear train to target "the enemy." They are no longer protectors, they are enforcers, soldiers. Police reform must start there, with the men and women in police departments across the country who have aspirations, religious principles, families, neighbors, pot-luck dinners, kids who go to school during the pandemic, elders who are isolated. They live among us. They are us. When they dare to take a knee at a protest, they become part of the community again, they become whole.