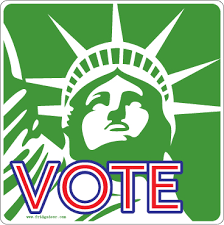 Lady Liberty does not require a caption.

“They want us to believe there’s no chance of success. But whether or not there’s hope for change is not the question. If you want to be a free person, you don’t stand up for human rights because it will work, but because it is right. We must continue living as decent people.”

With thanks to Rebecca Solnit for the Sharansky quote in her article in The Guardian on 10/14/2018:


I don’t often begin my blog posts with an admonition or a polemic, but it’s mid-October, we’ve got a fascist regime in the White House, the mid-term elections are nearly here, and to say nothing is to be complicit. Dear reader, whether Democrat or Moderate Republican, get out there and canvas, get out there and vote. Our freedoms as citizens and writers have never been more at risk.

Even more importantly, perhaps, encourage the next generation not to despair, but to resist and remain active. I say this with a full and open heart because I am an educator, because I am a citizen, I have a responsibility to young people especially. A dear friend and former colleague, now teaching in Jakarta, who has a young daughter, sent me an email the other night full of apocalyptic thoughts. I could hardly sleep. Then the next morning, he sent me the Solnit article. Thank you, William!

He’s been watching the stateside struggle from afar, which makes it harder, of course. But what has happened here and abroad —the resurgence of the supra nationalists—is global and has global implications. We cannot rest.

This weekend I’ll be canvassing for Antonio Delgado who is running to unseat Congressman Faso in the 19th Congressional District where I now live. This is not easy and it is not even absolutely safe. We are an armed nation. But I will be with friends and we'll have a list of Independents to persuade to vote for Delgado.
He is Latino, a Harvard educated lawyer, a Rhodes scholar, tall, lean, smart and warm like President Obama. The racist venom against him that has been unleashed is unprecedented. Let us tame this monster and return to the evolution of a civilized democracy.