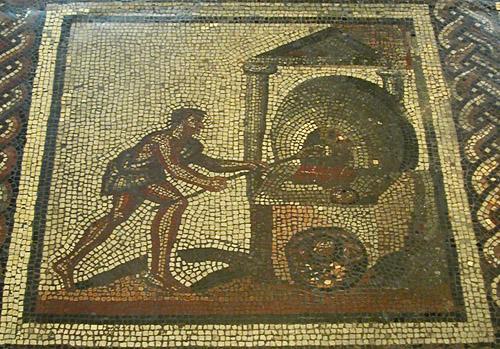 In 2017, construction workers in Copenhagen found ruins of an ancient Roman kitchen--mosaics and menus--during the renovation of a restaurant on the same site. Roman oven-baked flat-bread was served with a variety of toppings.

Conversations About Pizza in a Plague Year

We're here because this moment demands an explanation.

It's not often I have an opportunity to converse about pizza while ordering a curbside pick-up from the pharmacy. I didn't tell the man who was gathering my order that I was eager to have a conversation even though I am on the phone a lot and have a shelter-in-place partner. I love to talk and to ask lots of questions. Connection is my occupation; I'm a curious journalist. The pandemic has slowed me down. I don't like it. No wonder I've become addicted to M&Ms. I always include two bags with my order, a staple since #covidcurbsidepickup began. I wanted to make sure the M&Ms were in the bag. Had I forgotten to mention them? "No, you didn't," he said. "They're right here." Of course, pharmacy guy also knows my name as I'm a regular and he has to take my credit card. And his name, well I know it, but won't mention it here, I'm too distracted. Please note, dear reader: there is nothing unusual about distraction during a pandemic.

The conversation about pizza began because I had a torn green bag--a giveaway from a local pizza parlor-- on the front seat, and long ago, in another life, I'd had a conversation with this selfsame man gathering my pharmacy order about pizza and how pizza always arrives in a cardboard box, which is environmentally correct. The "no plastic bag law" had gone into effect in our town before the pandemic, but it is now all but forgotten. Plastic bags everywhere. The proprietor of my favorite pizza parlor had bought a bunch of green canvas bags logo-ed in big white letters with his personal name, which is also the name of the pizza parlor: Rino's. Rino's is in the same mall as Ignite, the gym we can no longer enter. I know Rino—we both preferred the same bike at the gym when the word "gym" was still in our morning lexicon—and sometimes he was using it when I arrived for a work-out, and sometimes I was using it when he arrived. He made good pizza. I liked his pizza. And even though the new canvas bags were thin and ripped easily, I didn't complain.

The guy at the pharmacy had never agreed about the quality of Rino's pizza. He reiterated this critique during our #covidcurbsidepickup conversation, and I replied with compliments: "Rino has been doing a great job with deliveries during the pandemic, albeit he's using plastic bags." I said. But the pharmacy guy grew up in Brooklyn. "The only good pizza is made in Brooklyn," he said, yet again, not referring to the backslide into plastic bags.

"The crust is too thin," the pharmacy guy continued.

"Oh, you still only like thick crust?" I asked. "You haven't changed your mind?"

"Thin crust is okay when there is a lot of stuff on it," he reminded me.

"But what if you don't want a lot of stuff on it? Just cheese? Or just veggies?"

I was prolonging the conversation. I didn't want to get back to work or find out what volcano had erupted in the Senate that day. But the guy was eager to get on with his next order. I was taking too much of his time and it was all on the phone, whereas our previous conversation about pizza had taken place F2F. It's easy to linger F2F and delay a good-bye. Now there was a line of cars behind me at the curb waiting for their pick-ups, so I said, "Okay, I don't have anything else to say about pizza right now." Some conversations don't last long. A conversation about pizza during a pandemic is one of them.