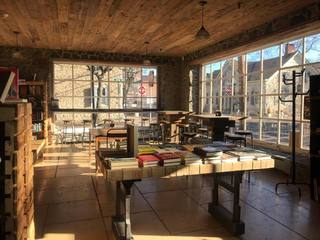 I drove up to Kingston, NY to deliver "Say Nothing," to Rough Draft Bar & Books on John Street. I'll be one of the local authors signing books there on September 9th. It's a beautiful store; paper is making a comeback.

It was a hot day and I parked as close as I could. I poured quarters into the meter and set out. John Street is in the old "stockade" part of Kingston, the first capital of New York State. The landmarked stone houses were built as a fortress against the Munsee Esopus tribe who fought like crazy to push back the European colonial advance. No luck; the houses still stand, but the Native Munsees are gone. The tribe migrated—what was left of them—north and west, merging with other Algonquin-speaking tribes for safety and survival.

I can't get their fate—their story—out of my mind. I don't know why I think about it so much, maybe because I only recently arrived in upstate New York, and can't abide omissions in the history, maybe because my own family was displaced and killed.

I'm walking through the Munsee history slowly, absorbing whatever there is to read, preparing to write something, I'm not sure what. Once injustice takes hold of me, I can't let it go until I've written about it. It hasn't always been easy.

"Go back where you came from." I've heard that before, from an English Lord in the House of Lords where I'd been called to testify in front of a committee. The Lord didn't like an article I'd written for The Times Educational Supplement exposing the treatment of West Indian immigrant children in the London schools. He addressed me as "Mrs. Bergman," and continued, as follows: "We thank Mrs. Bergman for her article and ask that she return to America from whence she came." Fair enough. I wasn't a citizen, I was an "alien," working and living in London. But I was also a journalist exercising my freedom to write in a parliamentary democracy albeit without a Bill of Rights. Still, unless I was in contravention of the Official Secrets Act, I was free to write what I pleased, and what my editors commissioned me to investigate.

And now four elected United States representatives, women of color, have been deliberately, aggressively—verbally—attacked. Trump's rallies feel like lynch mobs, the border patrols like fugitive slave catchers. How will historians tell this story years from now? Honestly and thoroughly, I hope.

I ended my sojourn in Kingston with a pleasant, healthy Bento Box lunch at Yum Yum on Fair Street. It was quiet, well air-conditioned. A man at the counter greeted me warmly. It felt like a sanctuary.

This latest diatribe targeting minority women isn’t the first salvo that’s been fired by our “leader”, it’s simply the most outlandish as it targets duly elected representatives of the United States. While the current situation doesn’t yet mirror Nazi Germany, the vicious talk and constant references to minorities who hate America, is stoking the anger and hatred of a small group of supporters who in believing that they are in the right, may be encouraged to take that next critical step of widespread violence and retribution. I, like you, hope that future historians will report on this time both honestly and thoroughly, but I’m also starting to fear that they might be reporting about a society that veered away from it’s democratic ideals. I hope I’m wrong!