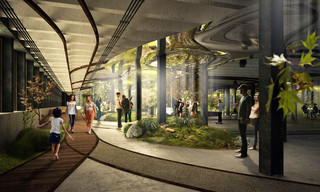 When will the work begin? Has it been funded? A redevelopment of the terminal is planned, bids went out. Of the surrounding city and its problems there is little news. Five finalists. This is an idea © Hudconja.
"Verily, I swear, 'tis better to be lowly born, and range with humble livers in content, than to be perk'd up in a glistering grief, and wear a golden sorrow.”


I hadn’t used the Port Authority Bus Terminal in a long time, hardly ever over the years, in fact. The armpit of New York I called it. I lived in Manhattan, I owned a car. Homeless people, filthy bathrooms, the scum of the city hung out there and the city did nothing, it seemed, to clean it up, clean the people up. Then in December, 2017, a Bengali-born, ISIS-inspired suicide bomber walked through the terminal, more or less set off the explosives on his body, injuring himself and three others. No surprise, I said to myself, that this attack happened at Port Authority. It’s a hub and therefore a target in the Age of Terrorism, but also indefensible space, in multiple meanings of that word. I had learned the concept in graduate school and photographed indefensible spaces all over the city. They were easy to find. On East 87th Street, where I lived at the time, architects had designed an apartment complex with commercial space below-ground level accessed by a ramp on one side and stairs on the other. No fast egress in a hold-up or a fire, everyone in the shops would be trapped.

Life in the city is hallucination and denial much of the time, layers of tar and concrete built on top of earth and stream, layers of stories: slaves and First Americans, settlers, immigrants and refugees. We are moles living behind our computers in darkened rooms, and when we surface, we are blind, we see nothing, we have learned nothing, we have forgotten our history, or never knew it.

Terminals in other cities and other cultures seem brighter, cleaner, airier, considerate of human effort and failings. But this, too, may be delusion, a trick of the traveler’s imagination as she steps uneasily into new landscapes and experiences. I mustn’t assume that Europeans, for example, or Koreans, for another example, maintain an aesthetic standard more developed than Americans. Can we trace our “failing infrastructure” to the banality of New World aesthetics, or lack thereof: pure Americana? How can an enormous mega store filled with junk food loaded with sugar and additives support life? Support the future?

On the day of my first commute back into the city after moving into a mountainous region the bus rammed into the Lincoln Tunnel and hardly moved for an hour. Serves me right for being such a snide snob, I thought to myself, as I realized I’d be debarking in the armpit of New York.

Returning to Port Authority at night, I had to find my gate, avoid the hustlers, and use the restroom. Luckily I found Sarah, from Haiti, hired to direct confused commuters such as myself. “Is there a clean restroom I can use?” I asked her.

“You will be surprised,” she said. “They have all been cleaned. They are beautiful. You will be happy.”

When I returned from the restroom, we continued our conversation in Franglish—stories about Haiti, Sarah’s family, and her disappointment at the behavior of American police. “Ton ton macoutes,” she said. “Why they kill a boy with a toy gun?” We were joined by an elegant, well-dressed Asian-American woman with a soft smile. Casually, she rested her head on her hands and said she’d left her storage locker in Soho opened, had noticed the lock in her bag, and though she knew she’d miss the 9 o’clock bus, she decided to head back downtown.

“But there is nothing important in the locker. I don’t know why I went all the way back downtown. Now I must take a bus and rest.”

“Do you know, Sarah?” I asked the Asian-American woman. For some reason, I hesitated asking her name though she had slid into the conversation like an old friend.

“We see each other here,” the woman said. Here meaning Gate 32 at the Port Authority Terminal in New York.

Sarah's wig had slipped sideways, her glasses were on the tip of her nose, but she remained kind despite the late hour. Multiple bracelets dangled on both arms. One was inscribed, “Good luck.”

I still hadn’t heard or seen our new conversation companion, not really. She looked and sounded intelligent, educated. I assumed she was a professor at SUNY, headed home after a day in the city, a professor like me waiting for the bus.

“I used to have a beautiful apartment overlooking the Hudson, up near Columbia, she said. “But I lost my job as a graphic designer. Now I work at Trader Joe’s and move around. I have no family.”

“I prefer to say houseless,” she said. “I am houseless.”

"La conditione humaine," I said, before boarding the bus back to my new home.