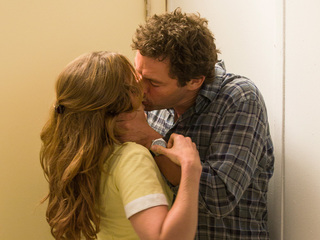 Ruth Wilson and Dominic West in "The Affair." Courtesy: Showtime
The women characters on “The Affair” all have pouty lips. What a soap opera! That being the case, why am I watching this program other than to relax and laugh?

A writer friend recommended it. I wonder about his motivation. Is it really so well written or is he hooked on the sex scenes? All that time lapse structure from different points of view is impressive, my friend says. Remember “Rashomon,” the 1950 Kurosawa film? There’s a murder involving four people. They all have different stories. Orson Welles used a similar device in “Citizen Kane.” Both films are classics; we watch them over and over again with equal pleasure. And we always notice something new. I can’t say the same of “The Affair,” and though I managed to keep watching until the end of Season 2, I don’t plan on ever watching it again.

Mostly I was fascinated by the predictable/ constant sex scenes, the underbites, overbites and deep red lipstick, and the two main actors, Dominic West and Ruth Wilson, who are both British. It was fascinating to observe their impersonations of hot, shallow, irresponsible, foolish Americans as they feigned regionless American accents. Actors always do their best so I cannot fault them. And Dominic is a hunk.

In journalism we also have something called the “Rashomon effect,” which is much more serious than the POV gimmick in “The Affair.” When we go out to interview people, we must be mindful of subjective interpretations and corroborate every assertion and every accounting and recounting of an event. We gather varying points of view and present, interpret and assess as fairly and accurately as we can. Unless, of course, we are creating factoids for the tabloid press. In that case, we’d still be writing soap operas.