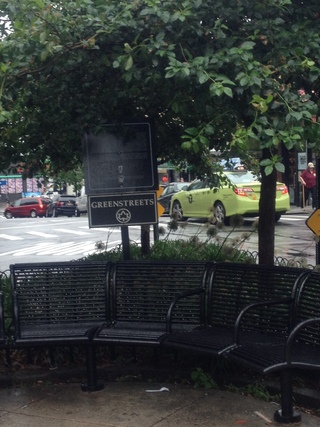 The benches on a rainy day. Photo by Carol Bergman
I needed a break from packing—we are moving next week—an iced coffee, and a breeze off the river to revive me. My husband wasn’t feeling well and we had to cancel a dinner plan which I had been looking forward to as an escape from boxes. “I can’t stay in this apartment another minute,” I said, and off I went, my backpack loaded with iPad, journal, a pen. No student papers yet as the summer term has just started, so I would be able to read for myself, a treat.

It’s foolish to anticipate solitude in New York City with its vibrant, verbal population. Settle down anywhere—even the subway—and stories pour out. On the #1 train the other day, a woman admired my bracelets and that was the beginning of her life story: she’s studying to be a vet tech, there is only one school in New York—La Guardia—that has this course, she doesn’t like children but loves animals. And so on. The iPad got closed and stored away. I am 300 pages in to Chernow’s biography of George Washington and the New Yorker for the week has already been read, so enough reading, I said to myself.

Storytelling. There’s no way to shut it down. We are hard wired to speak and to share our stories, the mortar that holds together our human family. That all said, I was looking forward to the ice coffee, the breeze, and a quiet read. Ah, benches.

I knew I’d seen some near Cafe Buunni—wonderful Ethiopian coffee—and there they were. And there was Rusty with his dog Angel, Nina (daughter at NYU) and the woman she is caring for (Parkinson’s), two women from Nyack recovering from their walk in Fort Tryon Park and various children, parents and dogs stopping to say hello. No one knew anyone else, introductions all round, neighborhood gossip, no reading to be done, especially when I learned that Rusty—short for Orestes—had been born in Turkey of Greek parents and has lived in the neighborhood—in the same building—since he was nine-years-old and was, unofficially, a neighborhood historian. Any subject that came up and he took off, any question I asked, he answered. “You know this street used to be Northern Blvd. and in the 70’s all the cars parked near the park were stripped very night,” he said, “and there were police everywhere, sirens and gunshots, but it was better than the pogroms against Greeks and Armenians in Turkey.”

“What about this little plot of city wonder where we are sitting right now?” I asked. “It’s like a village green, a magnet for people to sit safely and talk.”

“The tree and the benches are just six years old,” he said. “We got a grant from Greenstreets—there’s the sign.” And he pointed to a sign behind us. “It’s a citywide program that converts paved, vacant traffic islands and medians into green spaces filled with trees and shrubs. It’s administered by the New York City Department of Environmental Protection. I used to work for the city, you know.”

The crowd on the benches thinned, and Rusty’s dog Angel was restless. It was time to buy some ice cream for my ailing husband and head home.

“To be continued,” Rusty said.