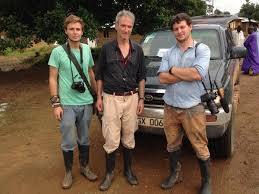 Adam Nossiter (center). Photo by the NY Times
When Princess Di was killed in a car crash in Paris and the paparazzi were gloating and falling over each other to get the most gruesome shot, what kind of journalism was this? Salacious, scandalous, tabloid journalism. And all of those reporters and photo-journalists—to their shame—were liable to a fine and imprisonment under French law which is grounded in the Napoleonic Code. Some refer to it as the “good samaritan law,” whereby anyone witnessing injury or distress is obliged to help. It is different in the United States; our law is based on English Common Law and there is no liability if we do not help, or moral obligation, or “duty to rescue.” Nonetheless, the discussion about rescue, engagement, and bearing testimony, is a constant among journalists. If we see a child starving in the desert and take a photograph for the newspaper we work for, are we obliged to help that child?

I will always remember those journalists on the day Princess Di was killed, I cannot forget them and what they did. She may or may not have survived her injuries; we will never know. But her death became a touchstone for many journalists who were repulsed by the paparazzi that day. I study my own motivations every time I interview and sit down to write. I try not to exploit for my own gain or fame, though temptations abound. I am not perfect. Every reporter gets an adrenalin rush on a big story.

I am thinking about all this today because of a front page story in the NY Times by Adam Nossiter, The West Africa Bureau Chief of the NY Times. He has been covering the Boko Haram atrocities in Nigeria for a while now, and has received death threats. He gets in close, takes risks. (Before Nigeria, he covered the Ebola outbreak.) And, yes, this is all very good for his career, and, yes, he will win prizes, but he is a reporter who cares. Perhaps, just perhaps, his courage will help the young girls who have been raped, impregnated and infected with HIV heal from their ordeal. I am sure he will not sleep well at night until he has done all he can to bring attention to this story.