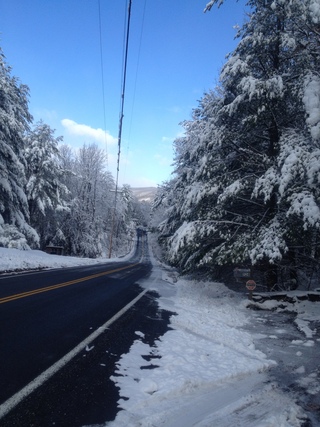 Photo by Carol Bergman
As 1775 began, a great many British subjects on both sides of the Atlantic asked themselves, how had it come to this? What had led to such polarization? In truth, the drumbeats of dissension had been increasing in intensity for more than a decade."

I was walking on a country road with my daughter and her two dogs when we passed a stone wall. The first line of Robert Frost's poem, "Mending Wall," came to me: "Something there is that doesn't love a wall." When I got back to the house, I looked it up and wrote out the first six lines into my journal. I've decided to memorize it. It's a long poem so I'll work it slowly, two lines a day. I've also pasted a link on a Facebook status together with a couple of photos: the pellet stove ablaze and light snow falling outside the window at 7 a .m. this morning. In the distance, a flock of turkeys and the black barn cat chasing them is barely visible in the dawning light. This landscape seemed the perfect antidote to the news that a nursing mother had been turned away at the airport and separated from her baby.

I was visiting for three days, not long enough to restore my troubled soul, but welcome nonetheless. My daughter is as immersed as I in the tragedy of the election. We talk and text and email and "like" and "share" our posts on Facebook. The conversation is intense, exhausting and necessary, we both agree.

I've been thinking a lot about the Facebook posts, as well as the emails I have received, since November 8th. Some of these writings are eloquent, even poetic. In our shared cyber-space, many who are not professional writers have become prolix. It's an interesting human phenomena. After all, we are blessed with language, and language we must use to express our deepest fears, concerns, observations and hopes. Rather than repeat ourselves endlessly, we search for new ways to say things. And our use of language elevates as we read more extensively and write more thoughtfully. Even our vocabulary expands. This new preference for narrative descriptive prose represents, I believe, a resistance to a sound-byte culture of rants and lies. It bodes well for our future as a more educated, tolerant nation.