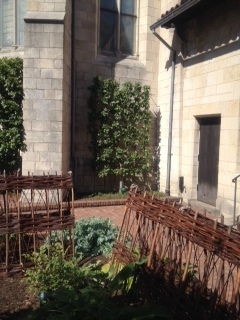 Espaliered Pear Trees at The Cloisters
I had read about Canadian artist Judith Cardiff’s “Forty Part Motet,” a polyphonic sound installation in an apse at The Cloisters, and finally had a chance to get there on Saturday. I hadn’t been to The Cloisters for a long time and had forgotten its grandeur and beauty. There is much to contemplate and admire in the collection of illuminated manuscripts, for example, and an herb garden with espaliered pear trees and poison plants. But the highlight of my visit was the Motet, a captivating non-verbal experience. It closes on December 8th and if you are anywhere in the vicinity, don’t miss it. It brought several participants to tears, including me. And when the Tudor “song” ended, a mere eleven minutes after it began, I was stopped by a “Studio 360” reporter. “How would you describe your response to this work?” he asked. Good question.

At first, I could hardly speak, and then I realized I didn’t want to speak; I had climbed into the music or it had climbed into me. This is a metaphor Judith Cardiff uses to describe the work she records and then installs/performs. “It poses the question of how sound may physically construct a space in a sculptural way and express how a viewer may choose a path through the simultaneously physical and virtual environment,” she writes in her artist’s statement. But all those words are inadequate to describe the kinesthetic bodily sensation of the forty choir voices she has individually recorded in Salisbury Cathedral, and then recombined into the Motet, one voice for each loudspeaker.

She instructs the viewer/listener to move around the room, which I did, despite the crowd. (Most people seemed to be too mesmerized to move.) And every time I moved, there was a new and different point of view, until I moved again. The sound reverberated inside me, amplified by the accumulation of voices. This is both a technological and a conceptual achievement. “Does it matter that it’s not the real choir, that it’s electronic?” the Studio 360 reporter asked.

“No, not at all. And this is Tudor music, incredible how we can hear it and feel it in 2013,” I said, already attempting to intellectualize the experience. Having been a radio reporter, I knew that he was pleased I’d agreed to the interview, and that I was articulate. He kept asking questions but I wanted to get away.

Walking back in a daze through the Heather Garden, another treasure, I wondered what analogies there are in writing to the sensation of climbing into the music, or the music climbing into me. When we read or write and are carried away—blissed out—entirely absorbed by the work, perhaps that would be an analogy. Or when we are reading a good book and don’t know what page we are on, or care, and when that book evokes sensations and feelings and transforms us, perhaps that would be another. I think, as writers, that is what we strive for always, though getting there is the challenge.
Be the first to comment