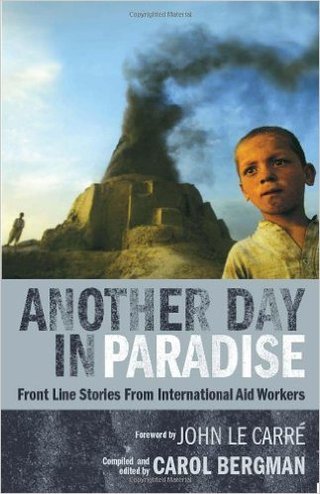 Cover photo of "Another Day in Paradise" by James Nachtwey.
I don’t think any writer starting out on her career believes that she’ll be expected to promote herself—endlessly—as I am doing right here, right now, on Facebook which RSS feeds into Goodreads, my Amazon Authors Page and Twitter. I have missed-out on Instagram I learned the other day at the “I Wish To Say” PEN event in Bryant Park. I was one of the readers, a professional photographer working the event was snapping pictures, and she asked if she could tag me on my Instagram account. I have opened an account but I don’t use it, I told her. Not yet anyway. And if I continue on this path of social media advertising for and of myself, which is already so time-consuming, will there be any time or inclination left to write?

Innocently, at first, we assume that others will do the work of pimping and primping for us. Pimping is the selling part of the busines, primping the copy-editing and proofing of text. I don’t want to be doing any of that. All I want to do is teach and write. That’s hard work enough. And satisfying. And although the work comes to fruition with pimping and primping, I don’t like it, nor do most writers and artists I know. Not to mention that most of us are solitary creatures, solitude required for the writing endeavor. How else can ideas, sentences and words surface in us if we aren’t quiet?

Quietude, what a quaint idea.

Once, riding shotgun in a car in Geneva with the publicist for the International Committee for the Red Cross, he told me that if I wanted to get the book I was working on about humanitarian relief work “platformed,” he could introduce me to John le Carré’s agent. Perhaps he could write a preface for the book? Le Carré was immersed in humanitarian advocacy and said yes in two minutes. The preface was written—with not a word out of place I might add. We also landed a beautiful photo for the cover by James Nachtwey, a renowned war photojournalist. Platform “favors.” And though we had to pay for them, the price stayed low. Neither Nachtwey nor le Carré wanted a lot of money.

Was I pleased? Of course I was. This was a worthy project that took two years to complete. Did I promote the book like crazy in the US and the EU? You bet I did. But it wasn’t advertisement for myself (in the solipsistic sense), it was advertisement of the work itself, which is different. I’m not sure that what I am doing here in this blog is the same. True, I concentrate on writing and the writing life, and hope that what I write has some value for writers and students, but self-promotion per se makes me queasy.