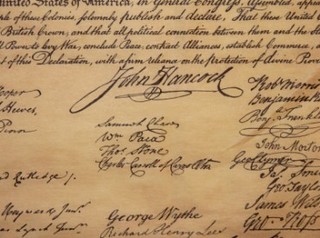 John Hancock's famous, precise signature on the Declaration of Independence. Cursive is much loopier and deteriorates easily.
I wonder if taking a drawing class will improve my handwriting? I’ve just read a bunch of manuscripts for my workshop tomorrow night and I can’t believe the clanky, messy scribbles I’ve made in the margins. They’ve become harder and harder to read, nearly illegible, even to myself at times. My handwriting, dear reader, needs a week of contemplative rest at Kripalu with lots of massage and italicized hikes in the woods. Italicized! Why did that word surface?

I used to love italic calligraphy when I lived in London. All the children and adults I taught there wrote in the most gorgeous, precise italic script. I thought it very clever, as the Brits would say, to teach italic to school children, and nothing else. No print, no transition to cursive. Now that American schools have mostly abandoned instruction in cursive, it makes even more sense. But what are children learning in the US School Districts? Only “print” and typing apparently. I don’t know if this is good, bad, or simply convenient. Why not teach italic? Would that make sense? Probably not. The teachers would have to learn it.

While living abroad, there was so much that was new and interesting to contemplate every day. The Brits do speak English, right? Why, then, couldn’t I understand what they were saying? I wrote in a trance, I wrote constantly, I became a writer, I decided to learn italic script. I collected cartridge pens with different italic nibs—they even make them for left-handers—and enjoyed penning greeting cards with long messages and filling journals, large and small. Traveling by plane and writing postcards was a problem, however, as the cartridges always leaked en route, so I eventually settled on non-leak pens while air-borne, not as much fun. Once landed, I searched out stationary stores to purchase pens for the duration of my stay. Les stylos italiques? I gave them away to the concierge as I paid my bill unless I was returning to London by train and ferry.

I try to persuade my born-to-electronics students that hand-holding a pen is a pleasing sensory experience that amplifies the connection between brain and written word. At the very least, it slows us down in a meditative way, I say. Mostly, they honor my professorial status and give it a try. But the silenced phones surface at regular intervals to read “notes.” Plus ça change.
.