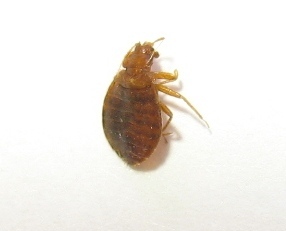 Because it was the end of the summer and I had been upstate and it was a bad mosquito season, I thought I still had mosquito bites. It took a while to put two and two and four together as I examined a cluster of three-in-a-row (breakfast, lunch, dinner) wheals on my body early one autumn morning. My husband had nothing, lucky fellow; I am allergic to the bites.

We hadn’t been told by anyone that the building we had just moved into had a recent bed bug history and, though many apartments in the building were empty at the same time, we hadn’t thought to ask why. So we moved in, anticipating with pleasure the quiet of our new neighborhood, two offices, fresher air, some plants on the windowsills, items out of storage decorating our new home, the books we carried laid out neatly on shelves. Three months later, all the boxes were unpacked, new travel routines established, we were feeling more settled. Until that morning.

I remembered a student telling me once that she had bed bugs and had just moved to Brooklyn. And that it had been an exhausting nightmare. Those two words are not an understatement. Dear Reader, it has not been easy: friends are loath to come over (who can blame them?), and our apartment is not a home.

It’s now been two months since the ordeal started. I write on the eve of another fumigation, this time of the beloved books we carried with us to be reread or consulted. How fitting for two writers that the pages of books and journals might host the eggs of these creatures. I hope they are having a good read.

Bedbugs in Brooklyn: a perfect title for a novel, or a screenplay or a short story!

Ugh, though. Their bites must be awful. And the thought of them breeding in your books is...reprehensible.

Once again, thanks for your comment, Cameron. There was, oddly, something freeing about not having access to my books and I wrote in my journal for a long time yesterday.