The Barn With New Doors 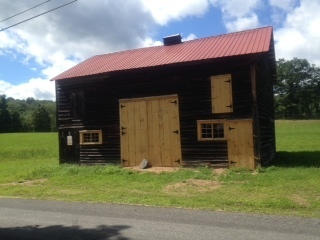 I was walking down my favorite road in upstate New York enjoying the migrating birds on the electrical wires and the woodpecker pecking in the distance when I came to the turn in the road that led to my favorite farmhouse. Everything from then on looked different and I was disoriented. There was a new electric fence and a man-made sculpted topography on the other side of it that signaled a new owner, or venture of some sort—a horse ranch, I later learned. The mountain had been carved at one time into a quarry and the steep road, which I have climbed often in all seasons, led into the woods where there was a stream and a still-standing hut with a pot-bellied stove that had been home to indentured laborers. This farmland, acres of it, had been parceled off in the early 20th century and, with the advent of the motor-car, was sliced in two by a tarmac road. Descendants of the original farmers still live on one of the parcels and I occasionally can spot a tractor in the distance and bales of hay but, mostly, the farm is gone, the main farmhouse has been sold to weekenders from Brooklyn, and now the abandoned quarry has become a horse ranch. Is this renewal, or obliteration of the past, or both?

I thought of the essay I have been laboring over for several weeks and why it is not working. It’s gone out to several readers and to my agent who thinks it might be expanded into a book. But I’m feeling discouraged and unable to move forward. I think I need new doors. In computer-speak, I need a different portal into the story. Maybe I’ll write a play, I thought, as I continued my walk past the ranch to the farmhouse, past my favorite barn. Lo and behold, my very thought, it had new doors. That old barn is like a Mondrian painting, perfectly balanced, sitting on the edge of the road, rich in color, and it smells wonderful because it is a hay barn, not an animal barn. Like my essay, it had been a bit rickety and listing to one side, though still beautiful even then. Now it was firmly grounded and it had the most magnificent new doors, an unexpected aesthetic pleasure which I have written about on my Home page here. And I am so pleased that the doors remain unpainted, for the moment, at least, as I stand in front of it and contemplate its beauty: old wooden planks and new planks, but still solid, still standing.