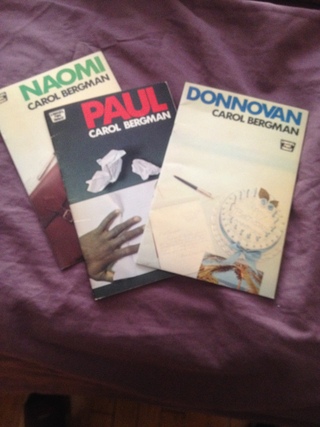 Plus ca change. I spent a decade teaching and writing in London at a time when the influx of immigrants from the Caribbean was challenging the antiquated post-colonial school system, its antiquated text books, and its racist assumptions. No people of color anywhere, no history of the colonized countries, whatsover. There were still golliwogs on Robertson jam when I arrived and a black and white minstrel show on television. I was in culture shock all the time, took notes incessantly, and started writing op-ed pieces and feature articles. Eventually, I gathered a few of my students’ stories and persuaded Heinemann Educationl Books to publish them as“Naomi,” “Paul,” and “Donnovan.” Combined with articles I’d written for the Times Educational Supplement, I was denounced in the House of Lords and told to return to America, where I belonged. I even received hate mail and one death threat.

And though England changed rapidly—the EU with its open borders and influx of educated, forward thinking “foreigners,” immediately put the UK on notice—I still thought America, land of my birth, beacon of democracy and opportunity, had evolved beyond the legacy of slavery more successfully. I was wrong. England has transmorgrified into a multi-ethnic society. Any lingering racism these days is reserved for the Muslim population. It’s not pretty, but these retro attitudes appear to be encapsulated in one backward-looking enclave. In fact, it’s an embarrassment to walk the streets of London today and feel the shock of realization that we, here in America, are struggling with our educational system and walled-in, albeit invisibly walled-in, homogeneous neighborhoods. Worse, the great economic/racial divide can be seen in every school, in every classroom. At NYU, where I teach, I have very few indigenous people of color in my classroom. From overseas, yes, but not from the United States. When I person of color enrolls in my workshop, it’s noticeable, because it is so unusual.

And now we learn that the children of color are still under-represented in children’s books. In 2014! What are the publishers thinking? Their mission statements are well intended, writes Christopher Myers, in a New York Times article on the front page of the Review section last Sunday. Lots of promises and commitments to diversity. But the reality is different: “an apartheid of literature.” And why? The Marketplace. Are these publishing houses out of touch or is it really true that no white adolescent boy wants to see a black boy on the cover of the book he is reading. Is this even possible?

In a companion piece, Christopher Myers’ father, Walter Dean Myers, says, “In 1969, when I first entered the world of writing children’s literature...children of color were not represented, nor were children from the lower economic classes. Today, when about 40 percent of public school students nationwhide are black and Latino, the disparity of representation is even more egregious. In the middle of the night, I ask myself if anyone cares.”

All children, all adults for that matter, and certainly all writers, deserve an expansive, inclusive landscape in which to dream and write and publish.