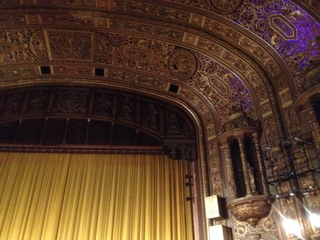 United Palace Interior Photo by Carol Bergman
We went to a gala fundraiser for the United Palace of Cultural Arts on 175th Street and Broadway. This is one of the last movie “palaces,” built before the Great Depression ended the indulgence of such vast “wonder theaters”—pure Hollywood. The palace, serving upper Manhattan, was owned by the Loew’s Corporation. Faux Abyssinian in design, filtered through the kitsch sensibility of a well-paid architect, it seats more than 3,000. It’s hard to imagine what the cost of heating or cooling the place might be today. Yet it still stands, a neighborhood landmark. Derelict for a long time, the building was saved from demolition in 1969 by the Rev. Frederick J. Eikerenkoetter II. Better known as Reverend Ike, Eikerenkoetter bought the building for more than a half-million dollars and used it as the headquarters for his United Church Science of Living Institute. It now also houses the Cultural Arts Center which is outreaching to the community and presenting concerts, programs for kids, and films. Sunday night was “Casablanca” night screened on a spiffed- up gigantic screen. What a treat! What a script! The audience was asked to dress up for the occasion, dance to 1940’s music, and pose next to a cardboard cut-out of Bogey. It was a festive evening, attended by over 1000, not quite a theater-full, but full enough. After opening remarks and a rendition of "As Time Goes By," by Reverend Ike's son, the screen lit up with "Casablana." For the next 90 minutes, cinematic rapture.

Years ago, I took Robert McKee’s one-day intensive screenwriting course . The last two hours of the seminar were devoted to “Casablanca,” analyzed frame by frame. Why does this film work? How is the story made? And though I have seen the film several times on my large flat-screen TV, I had never seen it on the big screen, as it was intended. Shot in black and white, without special effects, the story, the script, and the acting are in high relief.

Unlike narrative prose, a screen writer is forced to relinquish his or her work to a director and actors. The film takes on a life apart from the writer’s control, and is often re-written by a team of new writers. I am sure this is not easy for the writer. In the case of “Casablanca,” two writers wrote the original stage play, and two more worked on the film script. Yet, the film became a classic. And though no one expected such success, it’s obvious that the acting and the script had something to do with it. The script is available online for study: