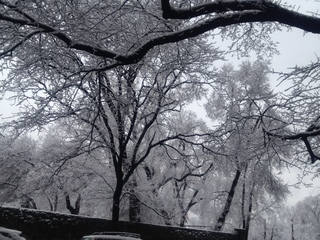 Photo by Carol Bergman
Life can be a twisted skein of snow-laden branches sometimes. And then the weather clears.

I spent most of yesterday reorganizing my atelier. I shifted furniture and unloaded books from the garbage bags where they have been fumigating. They have survived and so have we. Standing in the lobby commiserating, one of my beleaguered neighbors said, “Bed bugs hijack your life.” I agree. Apart from the exhaustion of constant laundry, vigilance, and visits from the exterminator twice a month, we have been living out of plastic bags. And still are. The vigilance can’t stop.

So its hard to concentrate at times, hard to write. I finished a short story over the holidays, sent it out to several readers, and am about to submit, the perfect labor intensive activity for yet another snowy day. I had talked to my agent about submitting using a male pseudonym as the story is edgy and told from a male POV. This is more than an experiment, it’s defiance. Though it’s 2014, male writers are often taken more seriously by editors, even female editors. Why? An anthropologist or psychologist will have to answer that question. Is the same true in England? I’m not sure. I lived, worked as a journalist, and published there for many years without a glitch.

I remember, not so long ago, I wrote an essay about the Golden Gloves competition at Madison Square Garden. Women were competing and I was struck-- almost literally at ringside—by their skill, their tolerance for blows, the blood. I wrote an essay about my ambivalence—admiration and horror. I also had fears for the health of their breasts, albeit they were protected by purpose-built shields. I could feel every punch on my breasts.

The article was well written, I knew that, and it was raw. But I couldn’t place it until I buried my first name in the initials CB: CB Bergman. The editors that wrote back to me assumed I was a male reporter. Their responses were immediate and chatty. Inadvertently, I’d been invited into their sporty club. And that was the point: women were now in the ring. Except the editors thought I was a man.