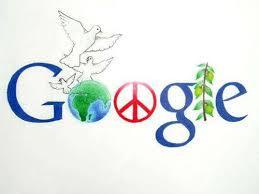 Thanks to Google, I googled, and found a logo.
Every so often I google myself, which may or may not be obscene, depending upon my obsession with the depth and reach of the search engine. How many minutes or hours I spend “googling”—a relatively new verb in our lexicon thanks to the corporation Google—will determine the innocence, practicality, or obsession of the activity. Googling –and of course even though there are other search engines, we are still “googling,”—is recommended for published writers, artists and musicians: Is anyone stealing our work? And because theft is almost impossible to track on the internet, it is gratifying to discover a perpetrator and demand payment. Gratifying, but rare. Usually a college professor somewhere has scanned something I’ve written to use in class. This is both a compliment and “fair use.” I do the same even though the university where I work has warned against it. In fact, so stern has been their mandate, that I feel guilty. Legally, I needn’t worry, but what about ethically? Am I cheating an author out of a royalty? Apparently not. The doctrine of fair use states that copies “for purposes such as criticism, comment, news reporting, teaching, (including multiple copies for classroom use), scholarship or research, is not considered an infringement of copyright.”

However, just for fun, before I go: I googled Google. Apparently, it’s a play on the word “googol,”coined by Milton Sirotta, nine-year-old nephew of U.S. mathematician Edward Kasner in 1938, to refer to the number represented by 1 followed by one hundred zeroes.

Is this an apocryphal story? Is there any way I can find out...by googling?

One more entry, then. In British slang, to “throw a googly,” a word borrowed from cricket, means to ask a hard or unanswerable question. This conjures an image of the founders of Google—Larry Page and Sergey Brin—playing cricket at Stanford as they designed this quite miraculous tool, which has become a verb, and an obsession, in less than two decades.