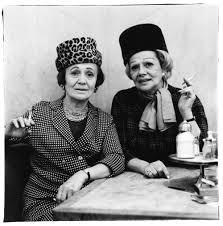 Photo by Diane Arbus
They tried to understand what had happened. It had happened fast, they’d been drinking—what else does one do at a bar (while socializing of course)—and talking about the descriptions of various wines on the chalk board. Someone had a good handwriting they noticed; it looked like calligraphy. Different colored chalks plus a drawing of a wine glass. Pretty damn good.

There were three of them, all men, hanging out after work. Where else was there to go? They had nothing much to talk about except their work and the descriptions of the wine and where they were going on their next vacation and their electronic devices. All three cell phones were on the bar, silenced, but lighting up now and again and demanding their attention—a tweet or a text.

A couple slid in next to them, a man and a woman, the woman much younger than the man and pretty, the man balding and overweight. The three friends began to whisper and giggle like a bunch of schoolgirls. And the balding man noticed and said, “Hey, what are you looking at?” The way he slurred his words, it was obvious he’d had a head start at another bar somewhere. But this didn’t stop the three friends from hooting and howling and making lewd remarks to the woman. “That your daughter?” one of them asked.

Within seconds, fists were flying and the older balding guy was on the floor. Not suprisingly, everyone had a different story to tell the cops depending on whose side they were on—the three young guys or the balding older guy and his pretty young date—and where they were sitting at the bar. The bartender had a story, so did the manager. Who could tell the story straight? Who knew what had really happened?

I watched it all unfold, as a reporter. And I thought to myself that it was up to me to get the story straight—to interview everyone, gather all the details, and write it from a reporter’s point of view, like a detective. I wasn’t part of the action, I wasn’t at the bar; I was at a table. I had an obligation. Small story and I am writing it here. My observations, my point of view.

I’d just come from a screening—a story about two sisters, concert musicians, who lived together like a married couple all their lives. Their symbiosis was eccentric and troubling, but never discussed. How did they become this way? There was very little narration—the reporter was mostly absent—cinema verité.

Diane Arbus intruded on her subjects in a similar way. Her photos are compelling, but they are also freak shows.