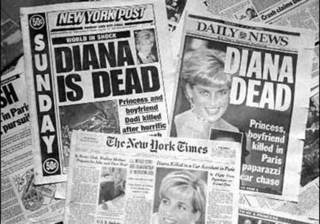 It seems a long time since Princess Diana’s and JFK Jr.’s death, but for some reason I was thinking about them both this week when a friend of mine told me a New York Good Samaritan story. You will recall, dear reader, that when the paparazzi arrived at the scene of the accident in Paris, they took pictures of the grisly scene—what a scoop—but did not help. In France, as it happens, there is a Good Samaritan Law, Non-Assistance à Personne en Danger, and if citizens do not stop to help, they can be indicted. I was later asked to reflect on the lack of such a law in the United States by an editor at George magazine for an anthology JFK Jr. was publishing called “250 Ways to Make America Better," which is why this particular Good Samaritan memory chip called up both Princess Di and JFK Jr., both gone too soon in awful ways. But their legacies remain, and for this we must be grateful. In the case of Princess Di: landmines. She sought their elimination from former war-torn regions and went to visit fields and fields of landmines in former war-torn regions. And in the case of JFK Jr., he started a very good magazine and was involved in many political causes. So when my Good Samaritan friend told me her story, I took notice, and decided to write a little something about it while, at the same time, encouraging her to write about it; I always question the ways in which I appropriate other people’s stories in the guise of reporting them. And this is, sometimes, an ethical conundrum.

Nonetheless, I will return to my friend’s story, if only briefly. She was on the West 4th Street A-train platform late last Saturday when she spotted two men, covered in gold jewelry, carrying suitcases and a baby rabbit. My friend loves animals, rescues animals, and donates mightily to animal conservation—elephants, for example—and she was horrified when one of these unsavory looking men took the rabbit and held it over the track threatening to drop it. And, immediately, she had an idea: “I am going to buy this rabbit.” And that is what she did, handing over her last $40. There is more to the story—there always is—but I will let her tell it.