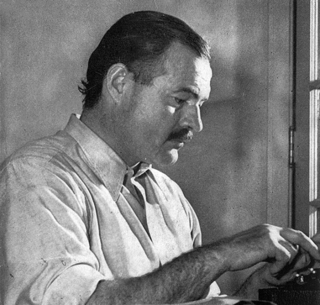 Hemingway, the war reporter, using a typewriter. There were no secretaries at the front.
“Wearing down seven #2 pencils is a good day’s work.”
--Hemingway in a Paris Review interview with George Plimpton, Spring 1958

And this was the first of several surprises in the Morgan Library’s exhibition of Hemingway’s papers between the wars: he wrote drafts of his fiction in pencil. And why did he use pencil instead of pen or a typewriter? So the text would feel “malleable and fluid” and could be improved. The penciled draft went to a typist and then was scratched over again—in pencil—with deletions, additions and word changes, and then went to the typist again. The last chapter of “A Farewell to Arms” was written 39 times. And only then did Hemingway contemplate a title. He made long lists, ideas from poetry, the Bible, Shakespeare.

This is the exact opposite of my process so I found it interesting. I have long lists of titles in my journals some of which get made into stories or nonfiction essays, most of which do not. The title becomes the armature, or is the armature, and I don’t begin until I have it solidly in my mind. The fluidity for me comes with revision of the text; I rarely change the title although sometimes an editor will.

Hemingway worked well with his editors though, like all of us, he was resistant to certain changes. But in the end he studied the suggestions and revised his work. He changed plot outlines, developed new characters, read voraciously as he was writing, kept notes.

“The Sun Also Rises” filled seven small notebooks. There is plenty of space between the lines and the handwriting is eminently legible. Hemingway crossed out, changed words, shifted phrases, but he rarely re-structured. I think this was because he was already a practiced writer before he attempted fiction.He had deadline experience as a reporter, a wonderful discipline for any writer—fiction or nonfiction. Copy had to be quick, clean and precise. His first journalism job was with the Kansas City Star, then the Toronto Star and, finally, with Collier’s during World War II. Last year, I downloaded his dispatches from the Toronto Star. They are wonderful to read—dynamic and prescient.

I don’t think it matters if we use pencil, pen, a computer or our smart phones—we all find our own way—so long as we are disciplined in our writing lives. Until he became debilitated by alcohol, Hemingway was a disciplined writer, as was his friend and rival, Fitzgerald. They read each other’s work and critiqued it. Casualties of war, suffering from undiagnosed “shell shock,” that we now label PTSD, both men self-medicated and eventually blew themselves away, Hemingway with a shotgun, Fitzgerald with booze which he gave up—too late.

The exhibition of Hemingway's innovative drafts and correspondence will be at The Morgan until January 31st.