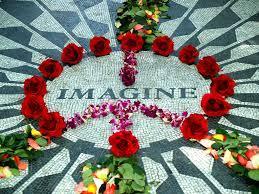 Imagine there's no countries
It isn't hard to do
Nothing to kill or die for
And no religion, too
Imagine all the people
Living life in peace
-- John Lennon

I talked to my friend Sonya in Paris after the shootings, the lockdown, and the police/military action. She had forced herself to get back onto the metro for a concert just a day after the killings and she was scared, as were all her friends. She was reading the accounts obsessively, watching the live action on TV, and mostly staying indoors. Her local Arab grocery store had been shuttered and feelings of hatred for immigrant guest worker neighbors surfaced too easily. I was shocked. Sonya is not indigène, she is not French; she is German. When she was fifteen she found her grandfather’s SS uniform in the attic of her childhood home. This required explanation which left her unsatisfied and ashamed. At sixteen she left for France where she became a fashion reporter, married and had a son. She is tri-lingual and trans-national, yet in the hours after the attack, she did not recognize herself.

She had known there would be trouble. The French have created high rise ghettos where the young men are restless, angry, uneducated and unemployed. They get into petty crime and worse. In prison they become radicalized, a familiar story. The same has happened in America where 2.1 million black men are in prison, 40% of the prison population, the highest incarceration rate in the world. So we must not be righteous, we must be sad. There are fault lines in our histories-- national, global and geopolitical.

Our conversation went on for two hours. I knew Sonya had to talk and talk and talk. My job was to listen. This was raw footage, unedited and still unformed as a story. But it needed to be processed, it needed to be told. “All sorrow can be borne if you put them in a story or tell a story about them,” wrote Isak Dinesen.

I was reminded of life in New York after the 9/11 attacks. We had all been struck dumb and numb by terrorism, the terrorists’ intent. Pulling ourselves back into life, keeping the story straight, figuring out what is going on without malice or vengeful thoughts, was a challenge. It still is.