Woman In Gold; Why This Is a Good Movie 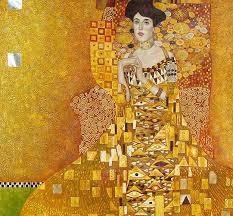 Portrait of Adele Bloch-Bauer by Gustav Klimt
Art restitution was still on my mind. I’d published “Egon Schiele, My Father and Me” in The Jewish Forward on February 11th about the restitution of one of my father’s Schiele paintings. The response had been interesting. Some readers were concerned that any Jewish misdeeds would once again and forever stir anti-Semitism. Some tried to disprove it—it never happened. How could Jews—Holocaust survivors no less—deliberately, or unwittingly, buy and sell looted art?

The doubters/deniers offered me documents. Would I like to see them to prove innocence of malfeasance? Others congratulated me on the brave article I had written. Though I do not consider myself brave, I do know that—thanks to my parents, their education, their early lives in a cultured pre-Nazi Vienna—my moral compass is strong. I stand by what I wrote in the article.

And now we have the film, “Woman in Gold,” with Helen Mirren playing Maria Altman, niece of Adele Bloch-Bauer, the subject of the painting by Gustav Klimt hanging in the Neue Galerie in New York. This gorgeous, valuable painting was restituted after many years of legal action by E. Randol (Randy) Schoenberg against Austria, and then bought by Ronald Lauder for his gallery. Lauder, the president of the World Jewish Congress, has bought other restituted paintings, a great gift to the families after so many years of heartache and struggle.

I am what the Germans call a “zweiter,” a Second Generation. According to Helen Epstein in her seminal work, “Children of the Holocaust,” it is my generation that does the “emotion-work,” which often means that we pay attention to issues as they arise and feel obligated to speak out about them. Our parents—the survivors—were too busy escaping and then surviving—beginning again, trying to be happy, and raising their children as best they could despite the distortions of their agonizing trauma. There have been other genocides in history—many are still going on today—and I worry that we are becoming numb to them. As a writer and a child of the Jewish Holocaust, I feel that it is my mandate to remain alert to these new atrocities and, more immediately at home, to discrimination and the protection of American freedoms. Indeed, I am very pleased to be an American.

In a line at the end of “Woman in Gold,” Altman says that she had thought the restitution of the painting would make her feel better; it didn’t. And why not? Because she had left her parents behind.

I had already been crying, but this scene took me over the edge. In my efforts to understand my mother’s pain, I had always fixated on her mother—my grandmother, Nanette, who was killed in Auschwitz—and had written about her often in memoir and fiction. I had imagined my mother’s farewell scene with her parents before her escape with my father and his siblings. The exactitude of the script startled me, as did Mirren’s performance which so perfectly embodied the elegant, dignified, undefeated hauteur of the Viennese refugees I had grown up with. The film is a tribute to them and I loved it.

I saw the film today, and I, too, was moved to tears by that scene. I loved the film and can't say enough about the depth of Mirren's performance.