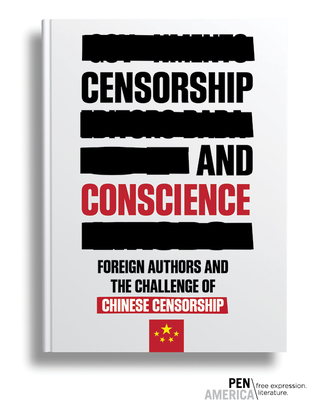 Ever since NYU Shanghai opened in 2012, I have had at least one or two Chinese students in my writing workshop. They are usually shy, or quiet, or scared, or in culture shock. They are expected to speak and to write with abandon, transparency and heart. Their English is still challenged, but this is not the biggest challenge. My classroom is an open classroom in an open society. For all our troubles here, we will not be put in jail for speaking or writing anything. Our inhibitions have a different origin: the constraints of the marketplace (difficult enough at times) or our own personal, psychological obstacles, all surmountable.

There are 44 writers in jail in China and many more under house arrest. China is the only country in the world that has incarcerated a Nobel Laureate: Liu Xiaobo. Liu was represented by an empty chair at the ceremony in Oslo in 2010. He is still in jail and his wife is under house arrest. Theirs is one of many stories of artists, writers and dissidents in China, a despotic communist state where one-man rule is as potent, brutal and feudal as it was under the emperors. With the economic boom and China’s influence and money on every continent, it is easy to forget this.

What happens to my students when they return to China? At an American PEN gathering this week, three Chinese dissidents (Murong Xuecun, Bao Pu and Xiaolu Guo) in town for demonstrations at the Book Expo, talked about the pervasive, endemic, government-driven censorship in China. And to a person, they were skeptical of the value of American authors getting published in China—a vast, tempting new marketplace—or of privileged Chinese students studying here who return to China with the cachet of an American diploma. Many are “seduced” by jobs in government or industry.

I feel protective of my Chinese students. I get to know them quickly despite their shyness. And I think it is cynical to believe that when they return they will necessarily be seduced. After all, writing is a strengthening, clarifying process. A personal transformation takes place that is both sustaining and lifelong. And so I am hopeful that exposure to a free-thinking environment will somehow take hold, and that the Chinese students who pass through our classes may, one day, be in the vanguard of democratic change in China. Or, if not them, then their children. And though all reference to the Tiananmen Square uprising in 1989 has been expunged in mainland China, it will be found again, and published for all to read, and celebrate.

Recent history in other countries, including our own, provide the best example. American history textbooks never mentioned the genocide of the Native Americans until the 1960’s, or the brutalities of slavery, for that matter, two fault lines in our own past which have still not been reconciled or healed. And in Israel, it is only in the last decade that the Israelis have learned about the eracination of the Palestinian people during their fight for independence during the British mandate.

As for the publishing opportunities for foreign authors in China, it’s a hard call. “Another Day in Paradise; International Humanitarian Workers Tell Their Stories,” has been published twice in China, more recently using the “simple” alphabet. I signed a contract both times too casually. To get published in China, that is a good thing, I thought.Yes and no. PEN now recommends a series of actions before publication in China. I might have insisted on a translator to check on the deletions, excisions, and changes that were made, for example. The more writers that do this, the better. My agent might have done the same.

Is it better to have 90% of a book published in China—available in its entirety in Hong Kong and Taiwan or on the black market—or not to have it published there at all? Do we perpetuate censorship and the despotic regime by agreeing to publication? Or are we supporting the struggling publishers and editors who want to keep going and are always on the side of the writer and literature?

The answers to these questions test our moral conscience as they did before the fall of apartheid in South Africa. And that is a good for a writer.

A PDF of the American PEN “Censorship and Conscience Report” is available online: