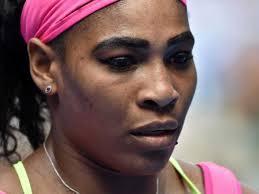 Photo by sportsndtv.com
My husband and I watched Serena lose to Roberta Vinci. Or, we watched Roberta Vinci defeat Serena. Why not say it that way? And why haven’t I used Serena’s last name? Because she is Serena, an icon. Did any of the commentators notice that on at least two occasions she looked as though she was berating herself and crying? How can an icon cry?

Because she is human and, by definition, she is not perfect. Because she makes mistakes. Is she allowed to make mistakes, allowed to be imperfect? Does her coach—who happens to be her boyfriend—allow her to make mistakes, to have doubts, to have bad days, to be imperfect? What about her sponsor? Tennis players are walking, breathing, emotional advertisements for various sports products. Their personal narratives are distorted to suit the product. They become mannequins, they become factoids. Sometimes—as in magazines—we are so focused on the make-believe story that we do not even realize we are watching a commercial.

I was thinking about Serena after the match and wanted to put my wise maternal arms around her. I hoped she had a good shower, a good meal and some fun in the remaining hours of the tournament. I hoped she had her nails redone. I hoped she could forgive herself for not achieving the Grand Slam, for buckling under the hype and expectation. Not only a woman but an African-American woman—the best of the best!! All that history of segregation and discrimination in what was once a “gentleman’s game”—embodied in that incredible honed female body.

There are analogies to professional writing, to all achievement in our goal-driven society, in fact. The pressures of making a living, the editors we have inside us that inhibit our writing, the unrealistic goals we set for ourselves, can all lead to stumbles and unnecessary disappointment.

There is no way to know what was in Serena’s mind and heart the day she lost the Grand Slam unless she tells us or writes about it. Maybe—someday—she will.