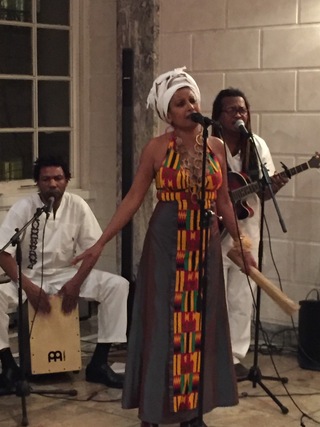 Razia Said at The Albertine. Photo by Carol Bergman
I attended an evening of literature and song from Madagascar at The Albertine last night, a Payne-Whitney mansion on Fifth Avenue just below 79th Street. The French flag was flying—the building has been owned by the French government since 1952—and the bookshop (books in French and English) on the ground floor, and the library on the second floor, are all part of the Cultural Services of the French Embassy.

Madagascar, an island off the east coast of Africa, is one of the most bio-diverse—flora, fauna and human—countries on earth. It was settled by travelers and colonizers from Malaysia, India, China, Indonesia, aboriginal Australia, and the Arab world. Then there was France and Britain. They fought over the island , too, until the French finally became its master in 1895. They held it until independence in 1960. Like other former colonies, there has been much political turmoil since.

Now try to imagine this country’s rich literature—largely unknown to the rest of the world—and a young, enthusiastic American translator –French to English—who is studying for her MA and comes across the literature. Why hasn’t she heard about it before? Not satisfied with what she could discover on the internet, Allison M. Charette travelled to Madagascar and stayed there for six weeks. Internet service there is sporadic but word-of-mouth is not. She met authors, gathered their books, and filled a suitcase with masterpieces. Here is her introduction to the current issue of Words Without Borders:

“Welcome to the Madagascar issue. The description is a little general; please do excuse us. It’s just that any adjective would be superfluous when you’re essentially introducing a country’s literature in English translation. Not a single novel from Madagascar, whether written in French or Malagasy, has ever appeared in English.”

Naivoharisoa Patrick Ramamonjisoa, Naivo for short, read an excerpt from “The Conspiracists,” the Kafkaesque short story Ms. Charette translated for the issue. He read it in French and then Ms. Charette read it in English. Eric Becker, an editor at Words Without Borders, asked questions. At first, the evening felt staid and predictable, like any author presentation anywhere, but everyone in the audience knew it was more than that. A first time. A birth. A recognition. How can so much of the world’s literature, so much of the world in fact, remain invisible to the west? It seems unconscionable.

After the reading we were invited for a glass of wine and a performance by Razia Said and her band. She had written songs in Malagasy--the indigenous language of Madagascar--one about her grandmother, the other about the future of the children of Madagascar. She had recently returned to live on the island after years of exile and now she was back in New York singing to us at The Albertine, a small miracle.