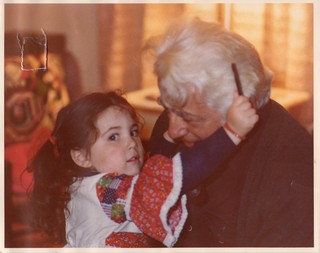 My stepfather with my daughter, Chloe. He was my anchor and lodestar. Photo © by Jim Bergman
I haven’t written much about my stepfather over the years—curious in itself—but if it hadn’t been for him I would never have had a memorable childhood summer, or any memorable childhood memories for that matter, or a precocious interest in the etymology of words and language, or courage on the ski slope when I was still too short to use poles, or a lifelong devotion to reading the newspaper and talking intelligently about “current affairs.”

My mother married him when I was four-years-old and always told me—bless her sweet lie—that she chose him just for me. I think I believed her until I was an adult because it certainly seemed that my stepfather –Ernst P. Poll –and I were fated in some way. I started calling him “Dad,” very quickly. My biological father was “Fred,” and the less I saw of him, the better.

From the day we met, until he became too demented to think, my Dad and I both talked about what we were reading and the new words we had learned. He was a native German speaker, had also studied Latin, and was continually improving his English to a self-imposed high standard. His shelves had books in German and English as well as dual-language dictionaries, a huge Webster’s, a two-volume Oxford English Dictionary, and law books. He had been a lawyer in Vienna, and though he never practiced law in America, he followed the Supreme Court decisions avidly, as well as American politics. When he picked up the New York Times at the breakfast table, and folded it back in that very adult way, I wanted to do the same, and I did, more or less.

Summer Sundays were luxurious, with the newspaper of record spread out on the wooden picnic table on the screened-in porch in our getaway home in New Jersey (that my stepfather built), my mother tackling the crossword puzzle, my baby sister in a high chair, and the Scrabble set waiting for the arrival of at least one of my stepfather’s brothers and his wife, both of whom had houses nearby. I would watch them play, or retreat to read a book, or ride my bike up the road to visit a friend and play Battleship, which was very boring compared to my discussions with Dad about what was going on in the big wide world.

Girls and their dolls were always boring to me. I was active, physical, what used to be called a “tomboy,” not a moniker I approve of, because I was a girl with athletic skill and an inquisitive mind that should have been rewarded, culturally speaking, but wasn’t when I was growing up in America. Lucky for me, my parents were European, my mother was a doctor, and my stepfather in particular encouraged my questions, my education, and my athletic abilities: ice-skating, tennis, swimming, softball, track. I excelled at all of them. Because of his attention to me personally, and my progress at school, I skipped two grades and entered college—too young—at sixteen. This is not a boast, it’s an origin story reality. I didn’t fit in, I was eager to learn, I could run fast and win races, I did well at school, I wasn’t an ordinary American girl, I became a writer.

I had never considered until just recently how important my stepfather’s gentle, loving, mentoring influence has been on my romantic and writing life. He was an anchor and a lodestar. My first boyfriend had a glove compartment filled with books like Graham Greene’s “The Comedians” which I thought was very sexy. Books-sexy? How do those things go together? Well, they do for me. My husband is an historian and deep political thinker from a renowned journalism family who reads the newspaper every morning cover to cover, albeit electronically. I struggle to keep pace with his incisive interpretations, and only rarely beat him at Scrabble.