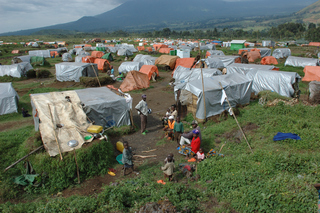 A Refugee Camp in The Democratic Republic of Congo. Courtesy: UNHCR
I went to my favorite fancy café to have a cup of cappuccino and a pastry. The bill was nearly $10. This may not seem like a lot of money to most people and it didn’t seem like a lot of money to me in that moment. I had just paid and was gathering my belongings when a young man sat down at the end of the communal table. There was something about his face that stopped me and I did not want to leave. I was feeling a familiar pain deep inside my body I call “my refugee pain.” Somehow I knew, I knew instinctively as I always do, that this man was a refugee or an asylee. My parents were refugees and I grew up witnessing this pain and feeling it. Writing eases the sensation and is therefore of some use to me and others, I feel. I am writing about it now.

I took off my coat and sat down again. The young man did not take off his grey wool coat or his green knitted cap. I was relieved to note that these clothes were clean. He was wearing large glasses that were slipping down his nose, shiny with sweat.

He sat for a while and looked around, bewildered. He was black. He was African. All the other visible employees in the café were white. One of the waiters put a menu in front of him. He picked it up in a desultory way and then looked around the capacious room. Conversation was buzzing. It was lunchtime. Finally, I said to him, “The service is not great here. You’ll have to call someone over.”

I don’t know why I said this. Maybe just to open a conversation. Because I knew that this young man was not there to drink cappuccino.

“I’m here to see the chef,” he said. Behind the hutch where the waiters collect the food were two men in toques. Both were black.

Then the manager came over. She was from Finland, tall and lean and blonde, studying to be a fashion designer. I bring my students here, sit for hours and read their manuscripts, and I know all the hired help. I was sure the well-dressed beautiful manager from Finland was on a student visa. She bent over the young man instead of sitting down next to him and asked a few questions. And though he didn’t have a CV, he’d been recommended by one of the chefs so she gave him an application and left him to fill it out. She’d been kind or kind enough, I thought.

The young man was from Congo, he told me when I asked. I could not imagine what he’d had to leave behind or who had been killed—friends, an extended family, maybe even a wife and children. He had escaped. He was safe. Was this enough?

I watched as he began to fill out the form. He stopped to think. Congo is a Francophone country; maybe he was having trouble with the English questions. Should I do more? Help him fill it out? His pen ran out of ink and he flicked it with his wrist. He put it down and I offered him mine. It was the least I could do. He needed a job. I doubted this would be his lucky day.

This post brings up an interesting situation that I am currently experiencing.

Last year, I connected with a young man from Ghana on a pen pal site, and we began exchanging emails and letters. He described his difficult life: an alcoholic, irresponsible father who is disabled; his own poor health; his extremely meager salary teaching elementary school ($20/month!); his dim prospects for advancement. He has recently been kicked out of his house and is sleeping on a friend’s couch.

He desperately wants to leave Ghana, as so many of his compatriots do these days, but does not have the resources to leave.

He has hinted for financial assistance but so far I have demurred. He talks about coming to live with us in the woods and taking care of us in our old age. I have not responded to this aspect of our correspondence.

This young man may or may not be telling the truth. Who knows? He is an excellent writer and “seems” to be coming from a genuine place. So what to do? My heart goes out to him, yet I am somehow unwilling to help him financially.

Your heart is big, indeed, to be corresponding with this man. My journalistic skepticism and experience with relief workers in the field says, "caution." How did he get your email? There have been many scams that sound similar.

I am sure there are some organizations near where you live where you could volunteer your time and experience. Refugees are arriving everywhere and need help learning English, finding jobs, and adjusting to their new country.I would stick close to home with that big heart of yours, Cameron.

And, once again, thanks for reading and responding to my post.