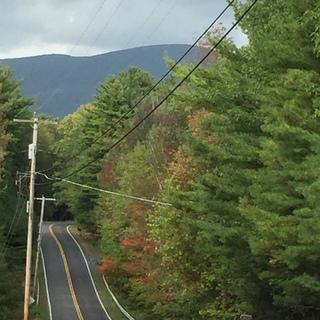 The mountains are so beautiful. Photo by Carol Bergman
"As you are reading these words, you are taking part in one of the wonders of the natural world. For you and I belong to a species with a remarkable ability. We can shape events in each other's brains with exquisite precision...this ability is language."

--Steven Pinker in "The Language Instinct; How the Mind Creates Language"


I was sitting next to Thea , an adorable four- year- old, in the back seat of a truck. Her father was driving, my son-in-law was sitting next to him, my daughter was on the other side of Thea's car seat in the back, her mother was waiting for us at a restaurant. It was late in the day, near dusk, and the mountains were already in shadow. The road was winding, the sky and clouds majestic. Thea had a lot to talk about, lots of stories to tell, lots of observations to make. Just four-years-old and stories and interesting words came pouring out of little Thea. Of course, she has wonderful, attentive, verbal parents. They talk to her-- and with her --non-stop. They don’t silence her in any way, though they do suggest a quiet moment or two, especially when they are in the midst of an adult conversation. At bedtime, they read her stories. So when Thea says, “The mountains are so beautiful,” with a Sarah Bernhardt inflection, she has either heard that somewhere or devised it herself. Or when she points to her hand-made bracelet and explains that it’s “homegrown” she’s evoking the flowers and vegetables in her garden. She shares the sweet peas she’s picked with everyone in the truck. And there are quite a few charming sentences to go with that generosity, the perfect condiment so far as this writer—who loves sentences—is concerned.

It’s a marvel how much complex language Thea has acquired in just four years of her life. She’s a chatterbox and I mean that in a complimentary way. Not long ago, when children were expected to be obedient—the seen but not heard tradition—the word chatterbox was a slur, especially when targeted at girls. But times have changed: being a chatterbox is a good thing for a four-year-old and for writers, by the way—on the page or in company. Which gets me to thinking: how can this chatterbox model be replicated in our classrooms? Is conversation being encouraged or stifled? Are vocabulary words being memorized or are they used in context? How much, in fact, do we expect of our children and ourselves?

What if instead of testing our kids every five seconds our tax dollars were spent on intelligently devised language and knowledge interventions? What if we taught all parents how to do what Thea's parents do without a second thought? What if our hard-working teachers still had time to enrich lives rather than grade them?

I am an old loving friend of Thea's parents, having known her dad since before he, and Thea were born. Her grandmother forwarded your blog to me.
I am so appreciative and so full of admiration and echo all you have said as I have in the brief and infrequent times I spent with Thea have experienced all you have described.
As has my daughter and her family living on the other side of the continent known and treasured. All of our years of familiarity have come full circle as we take joy in in Thea and her family.