An Encounter With a Writer on the Subway 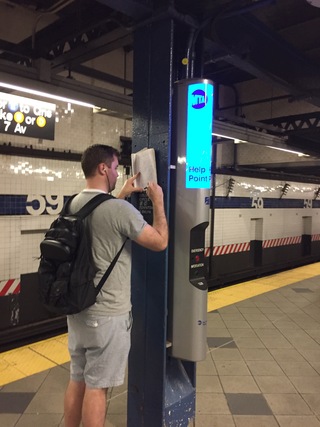 Jason Faust working on his new play. Photo by Carol Bergman
It was a hot, humid city Thursday. I got off the A onto the steamy platform at 59th St. to change to the C train. Oh, it was hot on the platform. I had forgotten to bring a bottle of water. The air-conditioned train will be here soon, I said to myself. Just relax. Breathe. Dream of Tokyo where the subway platforms are air-conditioned. Imagine you are in the pool. As most thoughts, these were fleeting. Heat descended, the train didn’t arrive. I turned to my right and there was a man, buds in his ears, holding a notebook against a pylon, writing. He put the book down a moment, then lifted it again to write some more. He was using a pencil, I recall, because who can write in that position using a pen, right? It doesn't work. And I recognized that Staples notebook. Unlike other cheap composition books it has a soft cover easily turned inside out, lighter to carry. My journal of the moment is the same!

So I couldn’t resist: I went over to the man and said, “What are you working on?”

I’d interrupted his writing reverie and he was startled. Then he smiled. The B train arrived, not my train, but I got on it anyway. I could get off at the next stop and still be okay for my destination. I wanted to talk to this writer who wrote on the subway platform.

His name is Jason Faust.

“Faust as in Faust?”
“Yes. I’m a playwright, I’m working on a play.”
That was in answer to my question as the train arrived.
“Had anything produced?”
“A one-act.”
“Day job?”
“At a theater. At least I’m in the business.”

One stop and we had talked a lot, as writers do. I asked Jason permission to write about him in this blog and to post a photo of him I’d snapped before I so rudely broke his reverie. He said, “of course,” and handed me his card. I gave him mine. Now we were networking!

I know many writers who concentrate best when they are surrounded by noise and activity, but never have I met anyone who writes on a subway platform. This was a first.