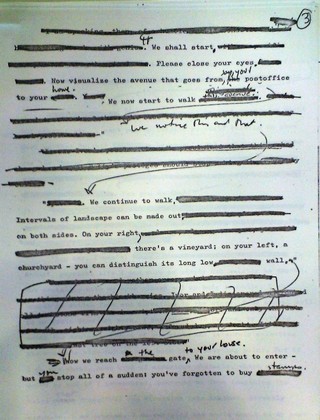 Gordon Lish's edits on a Nabokov manuscript. More like a frustrated writer making the manuscript his own.
A respite today from the election and international bad news as I prepare for two writing workshops this week. I love teaching and meeting my new students. So here's a post I wrote before the Chelsea bomb blast and the first presidential debate. I hope that my readers who are not writers will find metaphors--boundaries, for example-- buried herein:

Palimpsest: A manuscript or piece of writing material on which the original writing has been effaced to make room for later writing but of which traces remain.

I worked hard on a blurb for the jacket of a book. It was a commissoined writing job from a publishing house and there was no reason for me to take ownership, to feel pride, or to demand anything. So when the editor completely rewrote the blurb and said, “pretty good, huh?” I could and should have felt nothing. It wasn’t my book, it wasn’t my publishing company, it was just a job. But I couldn’t let it go. I felt resentful. He’d used my flair and expertise and made it his own just enough to claim it as his work. Traces of my work were there. They had provided inspiration and I could still see my well-wrought phrases inside the editor’s sentences.

I’d been working with the editor for a while and knew that he was a frustrated writer. I might have had compassion, but I didn’t. I said something mean and then regretted it. Not only on a personal level, but professionally. This guy was not going to hire me again.

Then there’s the story of one of my writer’s groups many years ago, or a writer’s group that failed instantly, I should say. I’d gathered some colleagues I didn’t know well for an introductory evening of discussion. Everyone brought two pages of a work-in-progress, any genre. I had been writing poetry and printed out a still raw long poem, just a first draft, I said when it was my turn to present to the group. I skipped out to the bathroom as everyone was reading it silently to themselves and by the time I returned, they were all abuzz with comments. Except for one person. She remained silent. When everyone else was done, she handed me my manuscript which she’d scratched over with multiple suggestions, corrections and rewritings. “It would work better this way,” she said. My words were visible under her words but my connection to the poem was damaged. When everyone left, I tore it up, and even though it was still in a file on the computer, I never could go back to it.

It was my first experience of a writer/editor who thinks she’s being helpful by overwriting my work with her words.

Kingsley Amis talked about a bad editor as someone who “prowls through your copy like an overzealous gardener with a pruning hook, on the watch for any phrase he senses you were rather pleased with, preferably one that also clinches your argument and if possible is essential to the general drift of the surrounding passage.”

Most editors don’t want to make the copy their own, nor is every editor a frustrated writer. They are another breed altogether, as are fellow writers who think they know better than you do how to revise your work by stealing it from you.