Tags: Arbus at the Met Breuer, prior restraint, censorship 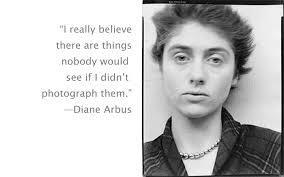 I went to see the Diane Arbus exhibition—her early work—at the Met Breuer last week. The arrangement made me dizzy—free standing syncopated columns. But walking through them, around them and, sometimes, into them, I began to experience the photographs in a new way. Many of the images have become iconic so the unusual curation was necessary to witness anew the work of a controversial photographer. She was a “super recognizer” of what used to be called freaks, people living on the edges of life, who may or may not have had mental or physical deformities. Arbus asks us to know and accept them, as she has done, and to reflect on our own afflictions. She grew up in a privileged world where suffering was kept at arms length and rarely acknowledged. What was her quest? I believe she wanted to find an affinity with the suffering of others so that she could feel her own—and to acknowledge it with her camera. Sadly, she took her own life in 1971 at the age of 48.

Not every artist or writer lives as intensely, of course. At the very least, we observe differently—with a heightened sensibility like the marginalized freaks in the Arbus portraits, like Arbus herself. And what we produce is far from perfect. Maybe the rendering isn’t clear enough, or we’ve faltered in our understanding, or we’ve made errors of judgment, or gotten a chronology wrong, or our readers/viewers take offense. They may even assert that we have no right to tell their story in concert with our own. And though our eye penetrates and the heart is full, a negative response is always startling.

Years ago, when I began “Searching for Fritzi,” the memoir about my Viennese family and the genocide that had killed nearly all of them, my mother did not want me to write the story. Our famous cousin, an Oluympic ice skating champion, had disappeared during the war. What had happened to her? It didn’t take long for me to find out. Fritzi had married a Japanese national and spent the war years in Japan. Worse, she had entertained German officers when they visited the Japanese High Command; she was a collaborator. My mother feared that Fritzi would sue if we exposed her even though the facts had been corroborated multiple times. Nonetheless, my mother’s intuition was correct because she had grown up with Fritzi Burger, watched her become a celebrity, and knew that she would not tolerate a tarnished image.

Fritzi had died before the book was published but her son and grandson were still alive. Both of them threatened to sue. The threat itself—like terrorism—was enough to scare me, of course. What writer has the money to go to court to defend a libel suit? None that I know. But I checked and double-checked what I had written and I still stand by it. The book has had legs—it found it’s way not so long ago to a library in Berlin and was taken up by a scholar there who has lived in Japan and speaks and reads Japanese. He’s dug even deeper, pulled articles from contemporary newspapers, and continued the examination of Fritzi Burger’s war years in Japan. I’m gratified by his attention to this piece of history.

Like Diane Arbus, who also was a writer, I write to see, to understand, and to share whatever insight I’ve managed to attain about subjects that others cannot or will not write about. If I allow any kind of prior restraint—whether it is a wish that I not write about a certain subject, or a warning that if I do I might be sued, or a request to read the copy before it is submitted, I could not continue being a writer. Of course, there are extenuating circumstances—when we write about loved ones, for instance—but they are few and far between. And, even then, we should pause before we hand over copy.